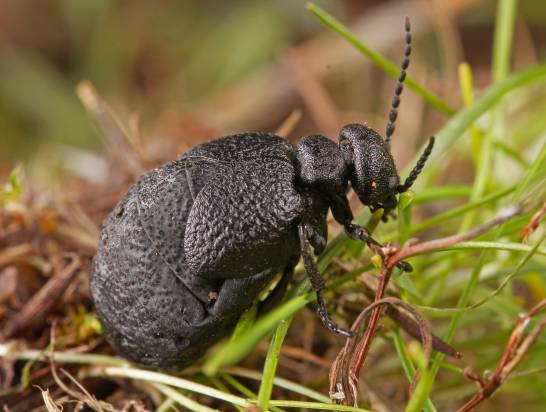 They discover a new species of beetle in central Spain

A scientific team made up of researchers from the National Museum of Natural Sciences (MNCN-CSIC) and the Instituto de Estudos de Ceuta (IEC) has just discovered a new species of medium-sized beetle belonging to the genus Eurimeloe in Guadalajara, specifically in Porto cheesethat separates the provinces of Segovia and Guadalajara.

This new species, called Eurimeloe Orobatesis a beetle of the Meloidae family, a group of beetles widely distributed throughout the Iberian Peninsula that is characterized by secreting cantharidin, a poison of pharmacological interest capable of degrading the tissues of their predators. The description of this species was published in the journal ZooKeys.

E. orobates It is a black and semi-glossy beetle, with the rounded head and long, thin antennae. In addition, it differs morphologically from other members of the genus due to its bristles, reddish tufts spread throughout its body.

The discovery took place in Puerto de la Quesera, between the provinces of Segovia and Guadalajara.

“Its description was possible thanks to the collection of five specimens, one male and four females, which we found in the port of La Quesera”, he explains. Alberto Sanchez-Vialas, researcher at MNCN. In fact, the scientific name of the species refers to the environment in which they emerged, roaming pastures and mountain paths (in Greek, “oros” means mountain and “bates” means hiker).

So far, the presence of this beetle It went completely unnoticed by investigators. “The existence of this new morphologically distinct meloid species, found in an apparently well-studied area of ​​central Spain, suggests that there are other species of the Eurymeloe genus that have not yet been discovered,” says Sánchez-Vialas. The work also allowed the team to describe the new subgenre. bolognato which the described species belongs.

A. Sánchez-Vialas et al. “A new systematic arrangement for the blister beetle genus Eurimeloe (Meloini, Meloidae, Coleoptera) with the description of a new species from Spain”. ZooKeys.

Nagpur Field – When Team India failed to even reach the target of 127 runs, the match was lost by 47 runs.