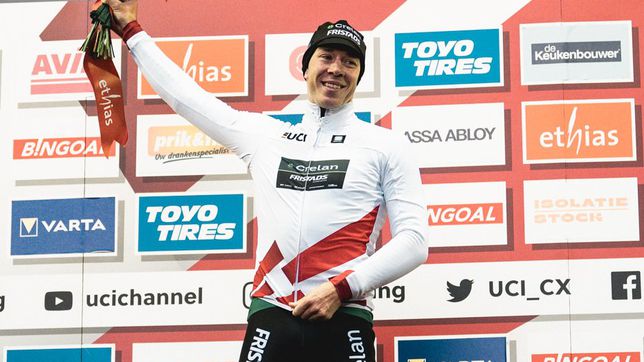 In the UCI Cyclocross World Cup – Benidorm Costa Blanca 2023 The best winter specialists in world cycling will meet on January 22. Not only will partial victory be at stake in the circuit of the parks foietes Y The Moralet: also the general of the most important world cyclocross tournament, which could be mathematically decided in the tourist capital of the Valencian Community. The 40 points that the winner of each race will add, with 30 and 25 for the occupants of the other two podium places, will be decisive.

In the elite men’s category, Laurens Sweeck (Crelan-Fristads), winner of two races to date (Maasmechelen and Beekse Bergen), is the clear favorite to settle the tournament overall in the UCI Cyclocross World Cup – Benidorm Costa Blanca 2023. The Belgian, who has never climbed to the final podium of the Elite World Cup (he was second and third in Under-23 in the 2014-2015 and 2013-2014 seasons, respectively and winner in Junior in 2010-2011), arrives a Benidorm with 24 points ahead of his main rival, his compatriot Michael Vanthourenhout (Pauwels Sauzen – Bingoal), who is the only one who still has a mathematical chance of taking the title from him.

To get out of the UCI Cyclocross World Cup – Benidorm Costa Blanca 2023 With the white and red jersey secured, Sweeck must score at El Moralet and Foietes at least 16 points more than Vanthourenhout, who would thus reach the final test in Besançon (France) without any option. In the women’s Elite test there are also two runners who will start in the UCI Cyclocross World Cup – Benidorm Costa Blanca 2023 with mathematical options to win the final crown of the tournament. Fem Van Empel (Jumbo-Visma) leads the provisional general classification of the contest with 35 points of income over his compatriot puck pieterse (Alpecin-Deceuninck), so adding six more points at the finish line of Benidorm They would serve Van Empel to score what, as in the case of Sweeck, would be his first World Cup in a mathematical way.

The Dutch runner from Jumbo-Visma He has been on the podium in the ten events he has competed in this season, winning six of them (Waterloo, Fayetteville, Tábor, Maasmechelen, Antwerp and Dublin), being second in three others (Beekse-Bergen, Overijse and Hulst) and third in the rest (Zonhoven). Similar numbers have been signed by her rival Alpecin-Deceuninckwho has also contested ten events with as many podium finishes, including victories at Overijse, Hulst and Val di Sole.

A tenant turns her toilet into a shower, she gets evicted