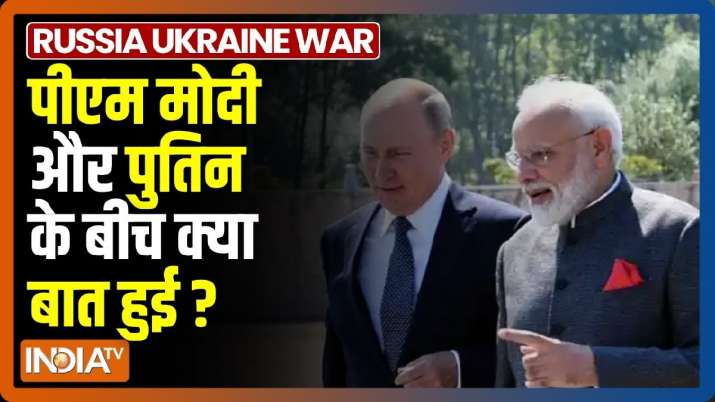 Russia-Ukraine War: Prime Minister Narendra Modi spoke with Russian President Vladimir Putin on Friday. During this, he asked to resolve the Ukraine crisis through dialogue and diplomacy. During the telephonic conversation, the two leaders also discussed global issues, including the state of international energy and food markets, a statement from the Prime Minister’s Office (PMO) said. Accordingly, the two leaders reviewed the implementation of decisions taken during President Putin’s visit to India in December 2021. They also exchanged views on how bilateral trade can be further encouraged especially in agricultural commodities, fertilizers and pharma products.

India always in favor of peace on Ukraine issue

The PMO said that in the context of the current situation in Ukraine, the Prime Minister reiterated India’s old stand in support of dialogue and diplomacy. It said the two leaders also agreed to continue regular consultations on global and bilateral issues. Days before talks with Putin, Modi had mentioned in an apparent reference to the Ukraine crisis that the G-7 and its summit invitees in Germany are meeting amid an atmosphere of global tension and asserted that India would always In favor of peace.

Russo-Ukraine war will affect all countries

In his remarks at the G-7 summit, the PM had said, “Even in the current situation, we have urged for the path of constant dialogue and diplomacy. The impact of this geopolitical tension is not limited to Europe alone. Rising energy and food prices are affecting all countries. He also said that the energy and security of developing countries are particularly at risk. Modi had also expressed concern over food security amid the conflict in Ukraine.

IND vs ENG: James Anderson made history at the age of 39, made a unique record by scoring a wicket century against India

Vietnamese baby girl burned with napalm has finished her treatment