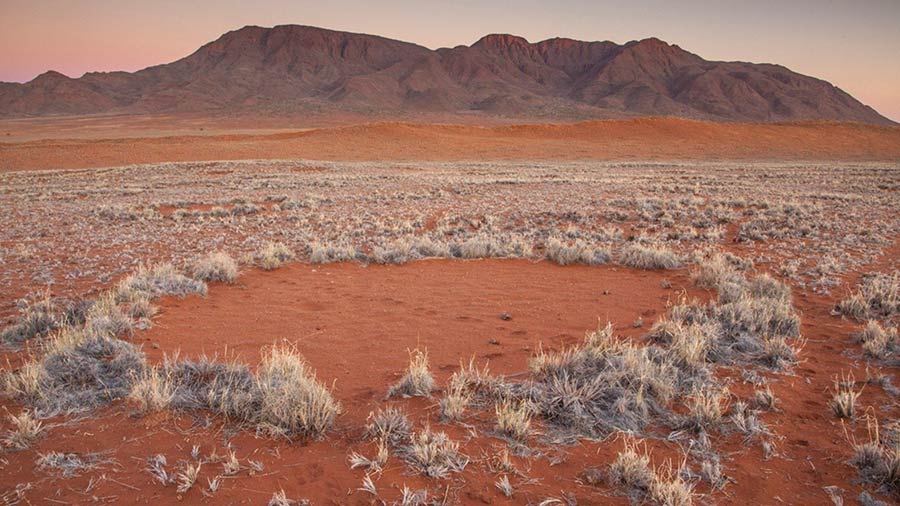 The mystery of what makes fairy circles appear in the Namibian landscape has finally been solved, with the findings of researchers at the University of Göttingen in Germany. This topic provides information to better understand the impact of climate change on arid ecosystems.

The Namibian desert is home to millions of fairy circles, they are marks in the grasslands that form circles a few meters wide spread for kilometers around. These desert circles lie between 80 and 140 kilometers inland from the coast of the Atlantic Ocean in the southwestern African nation.

But for nearly 50 years, the reason for fairy circles has remained unresolved by scientists trying to pinpoint their origin. There are two main theories as to what causes fairy circles: either it’s the destructive work of termites causing insect damage, or the plants are organizing themselves in some way in response to moisture and weather conditions.

This is the latest theory, according to the German scientists and the results of their work with the Gobabeb Namib Research Institute in Walvis Bay. The results were published in December in the journal Perspectives in Plant Ecology, Evolution and Systematics .

The researchers closely monitored rainfall and soil moisture conditions during the 2020 to 2022 dry and wet seasons. They installed soil moisture sensors in and around the fairy circles and recorded moisture levels at 30-minute intervals. all the while checking to see how the plants growth affected the levels.

“This allowed the researchers to accurately record how emerging grass growth around the circles affected soil water in and around the circles.”, explained the university. “They investigated differences in water infiltration between the inside and outside of circles in ten regions of Namibe.I a”.

About 10 days after the rain, the grass inside the circles started to die. After 20 days, the pastures were completely dead while the surrounding areas were green and alive. Root length showed that the plants grew in search of water, with no evidence of termite feeding and no visible damage to the roots for 50 to 60 days.

“What happens is that the grasses create moisture voids in the soil, as they sweat constantly, losing water in the intense Namibian heat.says Dr. Stephan Getzin from the Department of Ecosystem Modeling in Göttingen. The water quickly diffuses through the sandy landscape where the grass grows.

“By forming tightly patterned landscapes of evenly spaced fairy circles, grasses act as ecosystem engineers and directly benefit from the water resources provided by clearings.Getzin explains. “In fact, we know of related self-organizing plant structures from several other hard arid lands around the world, and in all these cases the plants have no other chance of surviving except growing in these exact geometric formations.“.

Scientists say the research results can help to understand these ecosystems, especially with regard to climate change that increases arid conditions.

Lionel Messi: "What a beautiful madness that we live!"

Ciclocross Benidorm: schedule, TV and where to watch the CX race live online

The suspect who killed 10 people in America committed suicide