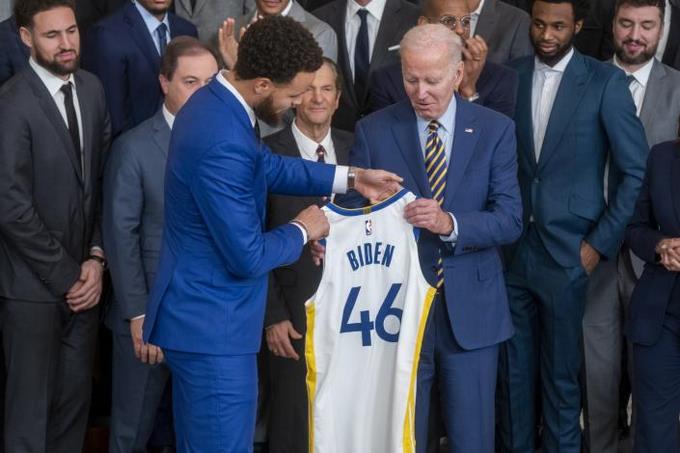 President Joe Biden celebrated the NBA champion Golden State Warriors at the White House by welcoming them Tuesday, expressing concern over the impacts caused by recent storms in California.

“We are monitoring the storms, floods, and landslides in California, and our hearts go out to the families of these communities,” the president said.

Biden intends to visit the state on Thursday and has already approved disaster assistance.

The Warriors won their fourth title in eight years, but they didn’t visit the White House while Donald Trump was president. Publicly, Trump withdrew the team invitation after Stephen Curry said he had no interest in visiting the official residence.

“The Golden State Warriors are always welcome at the White House,” said Biden, who honored Curry as “one of the greatest athletes of our time.”

He indicated that the Warriors “reflect the United States” with their style of play and demonstration “of constant movement, with individual freedom and personality that emerges as a team, a team that plays with pleasure, with the drive to be better.”

The Warriors outscored the Boston Celtics in six games in last year’s final. The victory came after a difficult period for the team.

Although they won the championship in 2015, 2017 and 2018, the dream of a dynasty crumbled with injuries to key players. The Warriors fell to the bottom of the league.

“The last couple of years were difficult,” Biden recalled. Critics wondered if the team was finished as a championship contender.".

Biden, who has also faced skeptics for years, quipped: “Guys, I know what that feels like.”

“As a proud daughter of Oakland, it gives me great personal pleasure as Vice President of the United States to say, ‘Dub Nation is in the house,’” she said, using the nickname given to Warriors fans.

Curry and coach Steve Kerr appeared in the White House press briefing room before the ceremony.

The star player thanked the Biden government for its work to bring back Brittney Griner, the basketball player who was detained in Russia on drug charges. He called her “a great part of the basketball family.”

Kerr said he participated in a roundtable on measures against gun violence, along with White House officials and players Moses Moody and Klay Thompson.

“We learned a lot about what the administration is doing to create a safe environment in our country,” Kerr added.

CSIC researchers will use nanotechnology to repair spinal cord injuries