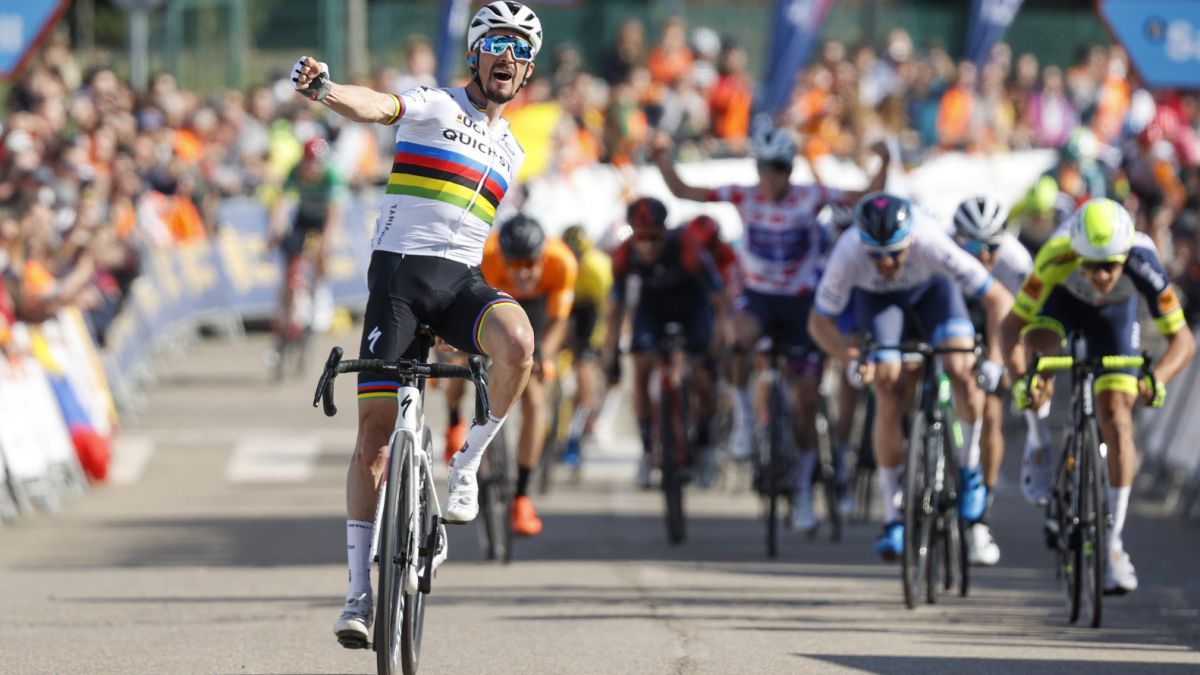 If in the first stage Roglic imposed his stripes as Olympic champion, in the second the world champion on the road showed off, an Alaphilippe who enjoys the Basque roads as if he were pedaling through Saint-Amand-Montrond, his town of only ten thousand inhabitants in the center of France. He has four stages in Itzulia, after the two in 2018 and another in 2019. He arrived with serious doubts, after missing the classics because he was not in good condition, and he has scared them away with a stroke of the pen, in one of the arrivals that most favour, a slight slope in Viana. It is what the superclasses have, that they take out the talent of him and the fury at the least expected moment.

When strolling through the streets of the Navarran town near La Rioja and Álava, you can see innumerable palatial Baroque houses. Little baroque has been of course the arrival of Alaphilippe, rather a hammer blow from Thor. He has thrown Evenepoel at him in a masterful way, he has carried him on wings to the ‘cage’ of fences, there he has released him and the world champion has not been able to take a bite out of anyone. Not even a rocket could have followed him. Doubey and Hermans have not even smelled him, he has taken them out of the wheel with amazing ease. The furious inertia of Evenepoel, with the red polka dot jersey as the best mountain cyclist, allowed him to finish ninth although he stopped pedaling. He was seen from the finish line blurred raising his arms in celebration while his partner scored the stage. The main protagonists arrived together and Roglic is still the leader.

Thus closed one of the longest stages of recent times in Itzulia: 207.9 km. A Tuesday that four men wanted to monopolize, Ibon Ruiz, Azurmendi, Okamika and Amezqueta. The first was the unrewarded hero, his efforts and behavior are moving. Surely he regretted that the track was not three kilometers shorter, which are nothing in the madness of 207. The escape of the day was present almost at the starting signal, on the climb to Uitzi, with only 3.7 km in the runners legs. Jumbo let things go, a sign that he had no problem handing over the leader’s jersey that Roglic has worn since the opening day.

The Basque runners gave a lot of play in this second installment. Leitza’s exit caught a few meters from Azurmendi’s house. Okamika is from Lekeitio; Ibon Ruiz, from Vitoria, which is not far from the beautiful places where the cycling caravan passes, and Amezqueta came into the world in Estella, another neighboring town. The most dangerous for the general was Ruiz, located in the general at 49 seconds. The escapees came to have an advantage of 5:30. They also represented the humble. The rebellion of the modest was suffocated by the owner of that jersey as colorful and desired as the rainbow. But after so much and so much rolling, the relays began to unbalance. Rubén Pérez, director of the BH, blamed Caja Rural for not giving a replacement ahead of them and in the peloton they were the first to surprisingly launch the hunt.

Ibon did not see it clearly and left alone. Two kilometers from the finish line, they captured his three former teammates and he was devoured by the group 400 meters from the finish. “I didn’t think they were so close, the world has come crashing down on me, I have touched it with the tips of my fingers, my earpiece burned: ‘throw everything you can’ they told me. After 200 kilometers, I had a huge desire and I have drawn strength from where there was none”, he lamented at the finish line. They made him want to cry. “We would have arrived if we didn’t get to slouch in some relays. We were all fair and when I gave a relay and I saw that silly break, I took a few meters and pressed hard”. The Kern Pharma rider has prepared the Itzulia conscientiously, “I dreamed of triumph, like every child here”, has even trained him in height. “He told me: it would be frustrating not to arrive, but that’s how it has been.” A massacre of a number one broke that illusion. A display of strength and bravery from Alaphilippe. “Objective accomplished, now for the general for Evenepoel”, he concluded. The glory for him. And honors also for Ibon.