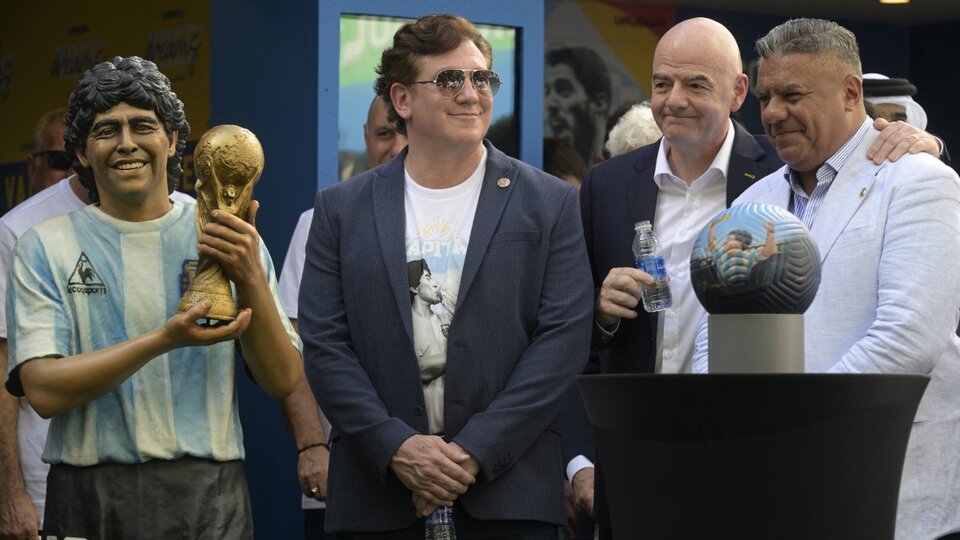 FIFA President, the Swiss Gianni Infantino; His Conmebol counterpart, the Paraguayan Alejandro Domínguez, and the head of the AFA, Claudio Tapia, met this Friday in Doha to honor the Argentine star Diego Armando Maradona on the second anniversary of his death.

The highest authorities of world, South American and Argentine football led an act in which numerous personalities of this sport participated, including the champions of 1978 and 1986in a Conmebol space set up in the exclusive Msheireb area of ​​the Qatari capital.

Also present were former DT from Argentina José Pekerman; the vice president of Inter Italy, Javier Zanetti; the current coach of Atlético de Madrid, Diego Simeone, and the legend of Barcelona, ​​the Bulgarian Hristo Stoichkovfriend of the Argentine star.

The open-air ceremony, witnessed by the international press and fans of various nationalities, began with the projection of images about his careercontinued with speeches by leaders and former players and ended with the famous story of Víctor Hugo Morales in the Goal of the Century, scored against England in the quarterfinals of Mexico ’86.

“For me it is a great emotion to be here because Diego is immortal. I feel that she is with us. When I received the proposal from the president of Conmebol to participate in this event, it took me a second and a half to say yes. Of course he was going to be there,” Infantino said.

The FIFA President invited “to honor and celebrate Diego” on the anniversary of his death, which occurred on November 25, 2020 due to a cardiac decompensation in a house in the Buenos Aires town of Tigre, where he remained isolated for treatment of his addictions.

“It made us cry – the Swiss recalled about his exploits -. We are in love with Diego and also happy and proud because, after our arrival with Alejandro (Domínguez), he was able to come back and enjoy the World Cup in Russia“. “Diego said simple things but with incredible impact. He was a leader in Argentina, South America and the world. We would like to be here with him,” Infantino wished before leaving escorted by his security in an official car for the Qatar 2022 World Cup.

Previously, Paraguayan Domínguez, host of the event, described the day as “a very special day for Conmebol”which exhibited a wax statue of Maradona with the World Cup, some of his Argentina National Team shirts and photos of the star in moments of sporting glory. “Diego is immortal. Today he has to play another game, on another pitch. That unforgettable goal marked a before and after. It is fair to remember someone who contributed to the growth of what is now the World Cup,” he said.

Domínguez admitted that he had “a pending talk” with Maradona, but was glad to have “paid tribute to him in life”in contrast to the separation to which he was assigned by previous administrations due to the political impropriety of the Argentine. “To do justice is to give recognition to the champions in life. In Conmebol there was nothing in tribute to Maradona. Now we honor him as he deserves. A kiss to heaven for Diego “, he concluded dressed in a Maradona shirt with the number 10 and the legend” captain “.

Subsequently, Tarantini and Valdano spoke in representations of the world champion teams of ’78 and ’86. “Diego belongs to all of us. The privilege of the ’86 players is to have shared his most glorious moment,” said the former Real Madrid manager. “During the World Cup in Mexico, his degree of inspiration grew. Like the great painting masters, he made sketches during the tournament. Against Uruguay he was unstoppable but it only meant a sketch of his definitive work. Then he appeared at the right time, against the rival fair (England) and became a hero and legend”, he closed.

Héctor “Negro” Enrique, for his part, commented: “Everyone saw him as a player, he was a football genius and there will be no other like him, never in life. But we have to talk about the human side of him because we met him and it’s something he deserves. May we always embrace him,” said the man who was a teammate of the Ten in the 1986 World Cup and the one who started the play that ended in Argentina’s historic second goal against England in the quarterfinals of Mexico 1986, but was also one of his great friends. “I met Diego in Norway, on a tour prior to the World Cup. Diego arrived from Italy and I didn’t know what to do, he was nervous and wanted to run away but he hugged me as if he had known me all my life. That’s where love was born“, recalled Enrique, who was also one of the members of Maradona’s coaching staff in South Africa 2010.