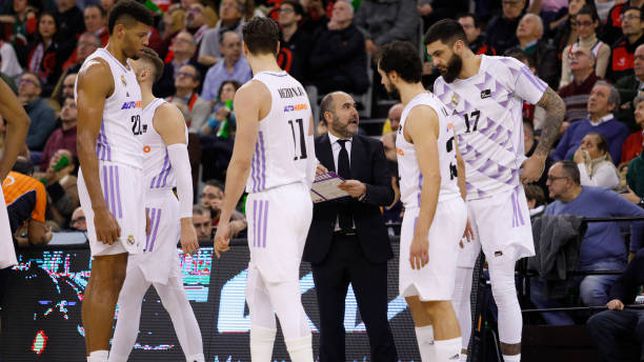 Chus Mateo spoke to the media before flying to Greece, where this Friday visit Olympiacos in Piraeus, in the Peace and Friendship Pavilion (20:00, Dazn). A duel of height between the leader, Real Madrid, and the second classified in “the most difficult professional sports competition that exists”. For this meeting the merengue coach get deck back (on Sunday, in Granada, Rudy had returned), but he loses, in principle, three players: Sergio Rodríguez (knee blow), Williams-Goss (fever) and Abalde (ankle sprain). So Sergio Llull, with the help of Adam Hanga, remains as the only point guard.

The danger of Olympiacos, the highest scorer and the most valued. “We have to make a good defense to stop their counter-attacking game, for that we not only have to defend their five against five in midfield, but we have to make good attacks that prevent Olympiacos from being able to run. It is the team that best translates the recoveries it makes into points, because it is the one that recovers the most and the one that scores the most recovery points. They run the counterattack very well, but they also pass the ball very well and they are the team that assists the most. They are in no hurry to find a good shot. I really like how they play. All players have options because there are great game generators. We must have a lot of balance both defensively and offensively in a difficult field”.

Improvements for Piraeus. “The other day against Covirán Granada, surely, we did not approach the start of the game well after a difficult week (Belgrade and Berlin in a European double day). The start wasn’t the best, but then we got into tune, even though we didn’t play a brilliant game, and we resolved it well. We face the game as a different match, because normally we are having good starts. It’s important for us to get into the paint and be aggressive because we play better that way. Normally we do it and it is not going to stop doing it like this in Athens ”.

New casualties: Chacho, Williams-Goss and Abalde. “Sergio Rodríguez suffered a blow to his knee in Granada and it has become inflamed. Today he was being tested, he shouldn’t be of great importance, but he hasn’t been able to train all week. I hope it’s not for long. Williams-Goss had a fever, he wasn’t feeling well, he wasn’t there to train and he probably didn’t travel with us because he was starting a feverish process. We prefer that he stay in Madrid and recover well to face the match against Breogán with all the available players. It has nothing to do with him not being in Granada, that was my decision, I gave a player who was doing really well a rest. Furthermore, during training we had a mishap with Alberto Abalde, who sprained his ankle and they are going to do tests. In principle, we will travel with twelve (Deck returns and Ndiaye is included)”.

Comparison of the hard core of both teams. “A certain parallelism could be found. Olympiacos is a team with which its fans completely identify, some players who have marked an era (Spanoulis and Printezis) and others who are gaining importance (Sloukas, Papanikolaou and Vezenkov) and who have a lot of weight in the offensive and defensive game . They are very well trained, Bartzokas is a phenomenon as a coach, I really like how he does it. They have the mechanisms acquired a long time ago, which gives them a hint of knowing what they want. Other players like Walkup, Larentzakis and McKissic have been around for a while and have brought in Peters, Bolomboy… It seems like a super team to me”.

The enormous equality of the Euroleague. “We see that we can win with anyone and lose with anyone, that anyone can mess with you, that keeps you in constant tension. The average level of the teams has risen, there is more demand. Nobody can take anything for granted. Until the end of the regular season you have to keep working on a day-to-day basis, giving weight to each training session and each game because that’s how you position yourself well and respect your work”.

Duel between two greats and the predictions. “We do not give importance to forecasts, we leave them to outsiders. We are going to try to win because it is our job and we always go one hundred percent. We are so equal in the classification with Olympiacos that anyone can take the cat into the water. That we take it with us, well, fantastic, hit on the table and perfect. That we lose, if we have given everything, there is nothing to say and we will continue working to find the moment in which we have to hit the table, which will be when we start playing for a title. The Euroleague is the most difficult professional sports competition of all that exists”.

Bitcoin price could drop to $20K if CPI goes bad