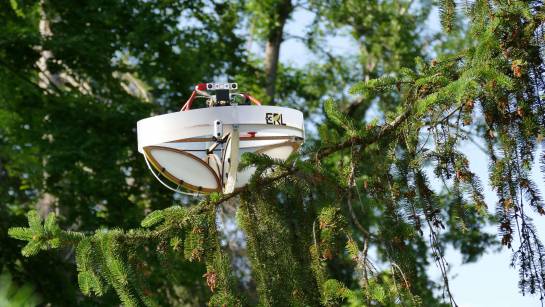 Anthropogenic climate change and human expansion into habitats rich in animal species have caused a decline in global biodiversity, but quantifying the severity of this decline is complex.

Ecologists are increasingly using traces of genetic material left in the environment by living organisms – the so-called environmental DNA (eDNA) – to catalog and monitor biodiversity. From these samples, researchers can determine which species are present in a given area.

Marine eDNA is relatively easily obtained from water samples. However, achieving it in terrestrial habitats such as forests is not an easy task.

Scientists at the Zurich Federal Institute of Technology (ETH Zurich, Germany) and the Swiss Federal Research Institute (WSL) have created a drone that can autonomously land on tree branches to collect these samples.

“eDNA studies are revolutionizing biodiversity monitoring because they are non-invasive and multiple species can be detected, even the most elusive ones, from a single environmental sample, be it water, soil or air,” Mintchev Stefano told SINC. , Professor of Environmental Robotics at ETH Zurich and WSL and co-author of the study published in Science Robotics.

The expert points out that “sample collection is one of the most laborious and expensive parts of the workflow. Drones can automate eDNA collection and get essential information from more places with less effort. This drone is the first robot designed to autonomously collect terrestrial eDNA.”

In total, they tested it on seven tree species in the botanical garden around the Swiss Federal Research Institute. In the samples, they found DNA from 21 different groups of organisms, including birds, mammals and insects. “This is encouraging because it shows that the harvesting technique works,” says Mintchev.

A robot with the balance of a bird

It is a four blade encapsulated drone that incorporates an adhesive outer layer to capture eDNA from trees. But not all branches are the same, as they vary in thickness and elasticity. Additionally, they bend and bounce when an item lands on them, making sampling difficult. For that reason, the scientists built force sensors into their robot that help it perch and maintain balance.

Our drone controls its propellers based on the stiffness of each branch. It is a procedure similar to that of birds,

“Our drone controls its propellers based on the stiffness of each branch. It is a procedure similar to that of birds, which tend to use their tail and wings when landing on very flexible branches”, explains Mintchev.

With all these accessories, the scientists propose this drone as a solution for measuring biodiversity in terrestrial ecosystems that are difficult to access, such as the canopy of forests.

This research is a proof of concept that opens up the possibility of monitoring biodiversity in forests, something that until now required a lot of effort and cost.

The researchers want to further improve the device to prepare it for a competition (XPRIZE Rainforest), whose aim is to detect as many different species as possible in 100 hectares of rainforest in Singapore in 24 hours.

We are very curious to see whether our sampling method will also prove effective under extreme conditions in the tropics.

In tests carried out in Switzerland, the drone collected material from seven trees in three days; in Singapore, it must be able to fly and sample ten times as many trees in a single day. For this, the collection device must be more efficient and mobilize faster.

Furthermore, collecting samples in a natural forest presents even more difficult challenges. Frequent rain washes eDNA off surfaces, and wind and clouds make it difficult for the drone to operate. “We are very curious to see whether our sampling method will also prove effective in extreme conditions in the tropics,” says Mintchev.

Eintracht thrashes the sunk Schalke and places second in the Bundesliga