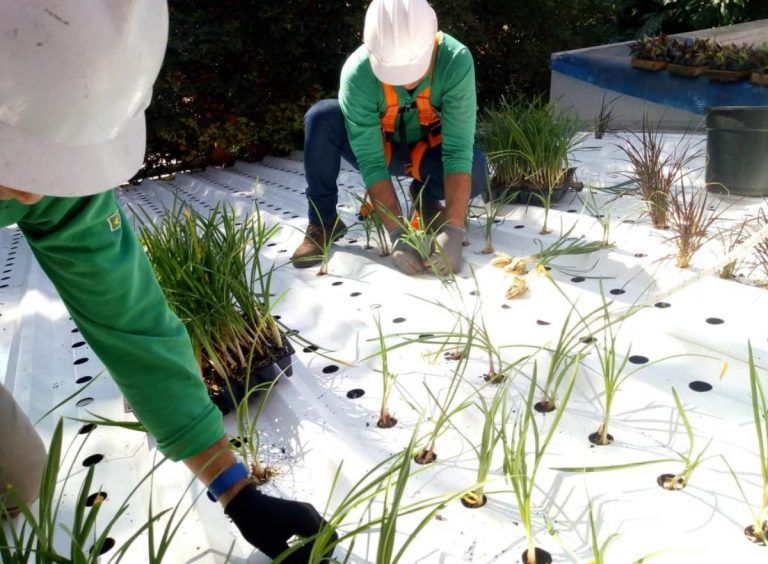 The hydroponic tile model is lighter than a conventional tile or tile and is leak-proof.

Grow wheat, maybe beans or a simple lettuce. Agronomist Sérgio Rocha aspires for people to be able to cultivate on roof tiles, literally. So he created the first hydroponic tile to grow different types of plants, whether vegetables or greens.

Since 2008, agronomist and ecologist Fabiana Scarda has been researching and developing technologies for green false ceilings. Many customers request quotes for installing orchards in clay or fiber cement tiles, but this is a challenge due to the characteristics of these materials, which cannot be permanently overloaded. The idea to develop Kaatop came from a problem.

Kaatop does not need a waterproofing membrane, as it is sealed by laying the tiles. The system, lighter than a conventional tile, is automated and leak-proof.

The product has been tested by the IPT (Technological Research Institute) and «not a drop was found, neither with the simulation of rain and strong wind, nor with its own irrigation system“, says Sergio.

The entire system is automated and the urban farmer can remotely control humidity, fertilizer content, water consumption, temperature and pH.

Growing on a Hydroponic Tile

Despite the disbelievers, the cultivation of roofs seems to have come to stay and with the new system, in addition to growing tomatoes, zucchini and strawberries, it will be possible to grow rice, beans, oats and even corn on the roof of a house. Rock is excited to go”plus cherry tomatoes and basil«, testing crops worthy of feeding the urban population.

“We want to expand the possibilities of urban agriculture. We are thinking about big cities and large-scale carbohydrate production, productively occupying these empty spaces within cities.“, aspires Sérgio Rocha.

Its designer points out that as the cultivation system is hydroponic, the possibilities are endless.

It is possible to grow up to 20 plants per square meter. Seven kilograms of wheat grains have already been harvested in just 35 square meters. During the tests carried out in Italy, the harvest of seven square meters was enough to meet a person’s daily need for fresh vegetables, taking into account the daily 400 grams recommended by the FAO.

“Depending on the season, these numbers can be higher. If we think of large areas like a shopping mall, with 10,000 square meters, we would have a production of two tons in one harvest.“, says Rocha.

With this system it will also be possible to create ornamental gardens, both for green roofs and for vertical gardens.

Following the principles of Biomimetics, Instituto Cidade Jardim reinvented a product that already existed on the market: the sandwich ceramic tile. From the small openings present in the epidermis of plants, the idea of ​​making holes to insert seeds and plants arose. Inspired by the plant tissues responsible for conducting the sap, they allow the passage of dripping hoses and the distribution of water internally by capillarity. In the same way that a tree takes water and nutrients to the crown, Kaatop combines the integrated irrigation circuit with the well-known low-flow irrigation and fertirrigation systems.

In addition, the irrigation water of the hydroponic system can be recirculated without loss of nutrients. Even with the irrigation turned off, the project allows the condensation of moisture droplets in the air, that is, it is capable of producing water in small quantities, which contributes to the reduction of water consumption in the entire system.

The idea was born in 2012 and followed a long process until now. In 2016, the project was selected by FAPESP’s Smart Cities – Sustainable Cities program.

Tests for the use of hydroponic tile

Today, the product complies with the ABNT NBR 15575-2:2013 performance standard, as a sealing element.

At the University of Bologna, in Italy, and in Germany, through the research group of the Technical University of Berlin and the Center of Excellence in Green Roofs in Neubrandenburg, evaluation tests of its use have already been carried out. The survey was also a finalist at the European Green Infrastructure Conference, held in London, England.

It is possible to see the tiles in full operation at the headquarters of Instituto Cidade Jardim, in Itu, in the municipality of São Paulo, where various agricultural crops and coatings are tested. In addition to the Higher Technical School of Engineers in Sorocaba, where automation tests were carried out.

The technology will initially be available for the Brazilian market and will later be expanded to other markets.

The IAPA criticizes the presence of Cuba, Nicaragua and Venezuela