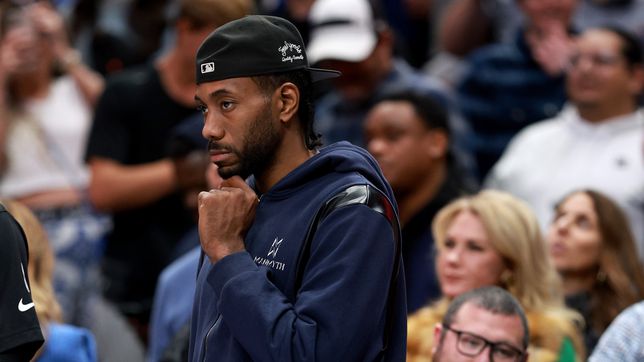 Steve Buscemi played Miter Shhh in Things to do in Denver when you’re dead. He was, inside a cult movie from the 90s, a quiet and silent character who carried out his work with extraordinary efficiency.. He only said what was necessary, and only when it was absolutely necessary. Coupled with all this to his extraordinary professional ethics, it is possible to see in Kawhi Leonard traits of Mister Shhh. At least, from the Kawhi of his first years as a professional: quiet, discreet, but impeccable on a basketball court, capable of surpassing anyone who came before him and even being the heir to a historic dynasty. That Kawhi won a ring, a Finals MVP and two Best Defender awards, as well as a steals lead and two All-Star selections.. It was a glorious time for a player who had the capacity to be the best in the NBA. But…

Kawhi is nothing like the player he promised to be. He doesn’t even have a character to match the circumstances. He came to the Clippers in 2019 after conquering an extraordinary ring in the Raptors with legendary averages (more than 30 points and 9 rebounds in the playoffs). and a winning shot against the Sixers in the seventh game of the Conference finals that was left for posterity. Only then did he resemble one of the best of all time and he was granted the talent that many thought he had. But there was no continuity: in the next three seasons, he played 109 of 226 possible games (less than 50%), he spent all of last season and this season blank, with everyone talking about Clippers entering the pools For the title, he averages 10 points with 13% on three-pointers… and 14 absences in 19 games. His problems in the lower body, those that marked his distance and subsequent departure from the Spurs and that nobody knows exactly What are theyThey have reappeared, but in the Clippers they are not very clear about what is happening to their player, something unprecedented in an NBA in which everyone is willing to give explanations except when it comes to Kawhi, a player that nobody knows and that nothing ever counts.

The Clippers, unlike Kawhi, are not bad at all: 11-8 record, Western Conference quarterfinals, well coached by an unfairly undervalued, but ring champion (in 2016, let no one forget), Tyronn Lue; and competing before the whole world. Before losing to the Warriors (without Paul George or… Kawhi), they reached three consecutive victories and have more than 23 points per night from Paul George, a good role from Marcus Morris or Normal Powell, very worthy minutes from the bench by John Wall… The Angelenos move in the trenches, they become strong in the mud: they are the worst offense in the NBA, but the second best defense. No one takes fewer shots per game than they do, but they select their shots well (they have the 8th best field goal percentage).. And they add victories without standing out in any statistics of the League at a global level: they are the eighth but team in rebounds, the fifth with the fewest assists, the seventh with the fewest steals, the eleventh with the fewest blocks, the same position they occupy in attempted three-pointers . but they add up; with slow play (the 9th slowest-paced franchise according to the pace), They always reach the last quarters alive, in which they solve perfectly by making the right decisions. They have, in fact, achieved 8 of their 11 victories by 10 points or less, a difference in which they have only been defeated on three occasions. Almost nothing.

So what do we do with Kawhi?

Kawhi’s problems, who at 31 years old, at a theoretical age to enjoy your primehas more physical discomfort than many of the veterans of the League, They structurally affect the Clippers and generate many doubts for the final phase: their absences are no longer a condition, they are already a fact that it has become such on the basis of insistent and unfortunate repetition. And the possibility that he won’t be there when the team needs him the most raises doubts and affects Tyronn Lue on a sporting level. You have to prepare a game scheme with or without Kawhi, adapt it to your teammates, decide whether or not to give him the ball in tight endings and even introduce him into the rotation, as a starter or not (add a couple of substitutions from his return), when does he make him go out on court and how will the rest of a squad that cannot be aware play?already at this point, if one of its two theoretical stars is going to be available when the moment of truth arrives.

For the moment, Lue is managing well, he always has, Kawhi’s minutes on his return and that eternal question of how long he will be on track and, above all, when to give way. Kawhi has played 24, 22 and 23 minutes in the three victories immediately following his return, and has played 7, 4 and 6 minutes in the last quarters, coming in and out depending on how the score goes.. He hasn’t attempted more than 11 shots on any of the three nights (he attempted almost 20 in his first season in Los Angeles), but his incidence has been significant: three straight wins, two in tight finals in which he has participated partially, with a role in defense that has almost always been the correct one. Without getting too involved in the attack, he has known how to let his teammates take the initiative and devote himself to gaining confidence and being important to his team. He has accepted the role of substitute when he has touched him. But he is still an oversized player at the moment: he will earn 42 million this season, with 45 and 48 the next two. Too much money for a star that has lost its light for a long time… and that does not seem, at least in the short term, that it will recover it.

The virtue of silence… or not

Beyond his sporting level, far removed both from what he was supposed to have and from what he came to have, Kawhi’s problem always revolves around his lack of communication. In a competition like the NBA, in which communication between journalists and players is fluid and constant, Kawhi is still a strange element that has gone from absolute star to which everything is forgiven, a toxic product that ends up harming even the franchise to which it may belong. Many times he is not with his teammates when he is offside and he is not even seen in the stands, he was not at the level in the bubble playoffs and was injured again the following year, in 2021, when the Clippers stepped on the conference finals for the first time in history. It is not reliable from the extraordinary level shown with the Raptors and the last few times that there has been gossip about a return to the slopes in style, it ends up disappointing, a feeling that depends directly, let’s remember, on expectations.

Nobody knows anything. Neither Tyronn Lue (or his coach on duty), nor the franchise, nor his teammates. skip a back to back has become a common practice without it being known why, often counting on the approval of the doctors that does not match their wishessomething that became a common denominator since he had those problems with the Spurs that caused an earthquake that ended his stay in San Antonio, with his rise to occupy the throne of Tim Duncan and with the plans of a franchise that was surpassed because of the situation and that he ended up losing that good reputation for management and good dealings with the players, a rule that has only been broken with a Kawhi that is often impossible to please. That was where his famous environmenta word widely used since those tumultuous months, was dissatisfied with the Spurs medical teamsomething that caused the forward to go to New York for treatment, where he asked for a second opinion without the Texan team being aware or, of course, agreeing.

Kawhi’s story follows its course, however much it differs greatly from what it could have become. There is always time for redemption and guilt taking, and the improvement of his relationship with Gregg Popovich, with whom he hugged and had a conversation in the Clippers’ victory against the Spurs, is an example of this.. But the amount of money that he has pending and his erratic behavior, sometimes inexplicable and other times morally reprehensible, cause many doubts with a man who is quite an enigma. And silence, which can be a virtue, has become the trait that bothers Kawhi the most, who in his opinion was an enviable professional during the first part of his career (he played a maximum of 74 games in 2016 -17, and has not exceeded 60 since leaving the Spurs)… just like Mister Shhh in Things to do in Denver when you’re dead. But beware, Steve Buscemi’s character doesn’t exactly end well in that movie (sorry for the spoilers). In that moment of relaxation is when they end up hunting him. Although he gets one thing unequivocal: die killing. We’ll see what happens with Kawhi. For now, she remains silent. For a change.