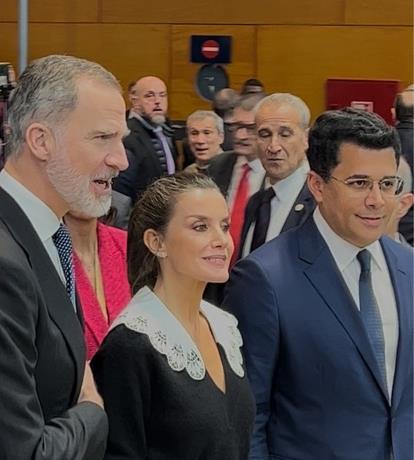 Taking advantage of the fact that this verse from the most recent song by the Colombian artist Shakira is in trend, during the closing of her speech, Collado urged to visit the half island, a varied destination that fits any budget.

the happy atmosphere
In the background, “La Bilirubina” by Juan Luis Guerra was playing, while a huge three-dimensional version of the Dominican tricolor canvas was waving, when a group of tour operators entered the number three FITUR pavilion, excited by the first stand on the left: Dominican Republic.

It is inevitable not to look, thanks to its majesty in size and the showiness that the two-level architecture and the characteristic colors of Quisqueya give itThe particular logo of the country brand strategy also influences, included this year among the distinctive symbols of the Dominican Republic.

In just minutes a man was seen group of foreigners dancing a fast “perico ripiao” that sounded on the wooden platform decorated with ferns that, although false, gave that tropical air to the Madrid morning, with temperatures between 0 and 6 degrees Celsius.

“But this stand is not empty,” said a Dominican living in Spain that she felt overwhelmed by the number of people who bumped into each other in the large space filled with small offices available for investors, tour operators, travel agencies and other people interested in this destination, projected to establish itself as the logistics hub of the Caribbean.

If you walked between the stations of the other Latin American countries, the presence was very small due to the crush of people in the space dedicated to the country that “has everything”.

It is unknown if the number of visitors were Dominicans who have traveled to the event to support and cover it or are those who, interested in the destination, are going to learn about the attractions offered by the Dominican authorities and to network.

However, in the corridors of the fairgrounds (Ifema) it was heard mentioning the Dominican Republic as the stand that yes or yes they have to visit, in verbatim words a young woman was heard saying to those who accompanied her: “we cannot leave without going through Dominican Republic”.

Like the year before, His Majesty, King Felipe VI, together with the Queen Consort, Letizia Ortiz, were present at the inauguration of the Dominican stand, which delayed the cutting of the ribbon that left the space open to the public.

Both the president of Banco Popular, Cristopher Paniagua, and the administrator of Banreservas, Samuel Pereyra, highlighted the importance of tourism for the country and its economywhen expressing a few words before the formal opening of the station.

Both highlighted the joint effort of all the sectors involved to achieve the growing numbers of foreign visits, which last year amounted to more than seven million tourists; Data that, according to the Ministry of Tourism, place 2022 as “the best year in the history of Dominican tourism.”

The beginning of FITUR 2023 was also attended by Juan Bolívar Díaz, Dominican ambassador to Spain; David Llibre, president of the Dominican Association of Hotels and Tourism (Asonahores); Biviana Riveiro, director of ProDominicana; the Tourism Commission of the Chamber of Deputies, headed by the president of the Lower House, Alfredo Pacheco; as well as tourism entrepreneurs.

Greater attractiveness
The great attraction of the module, without a doubt, is the cube of screens. The queue for photos and videos stretched at times to the exit door. And it is that this not only showed tourist attractions such as the Colonial City and the paradisiacal Dominican beaches (among the best in the world), but also the international art of Iván Tovar and the famous merengue, declared in 2016 by UNESCO as Intangible Cultural Heritage of The humanity.

“Juan Luis Guerra isn’t coming?” That was the curious question of an Ecuadorian woman who approached a group of Dominicans to find out if she could meet the singer-songwriter of “Todo tiene su hora”, a melody that enlivened the moment.

At FITUR, not only are the hotels and diverse landscapes of the piece of land that Pedro Mir locates “in the same path of the sun” presented, but also exportable products such as coffee and handicrafts.

In a side corridor, coffee pots, trays and hand-painted cups, jewelry with larimar and amber, the iconic faceless dolls, still lifes and other paintings, tobacco, among others, are exhibited.

But he also exhibits his talent, such is the case of the singer Covi Quintana, who sang live, and the presence of the illustrator Taína Almodóvar, who recreated miniature versions of the second Dominican menina that has been exhibited in Madrid.

“Dominican Republic will shine again at Fitur 2023”, predicted Minister Collado at the beginning of the event And on the first day of the fair it did, at least it was the most visited stand of the day after it was succeeded by Guatemala as host partner for this year.

Projection
But the stand also exhibits Creole talent, such is the case of the singer Covi Quintana, who sang live, and the presence of the illustrator Taína Almodóvar, who recreated miniature versions of the second Dominican menina that has been exhibited in Madrid.

“The Dominican Republic will shine again at Fitur 2023”, predicted Minister Collado at the beginning of the event and on the first day of the fair it did, at least it was shown as the most visited stand of the day after it was succeeded by Guatemala as a host partner for this year.