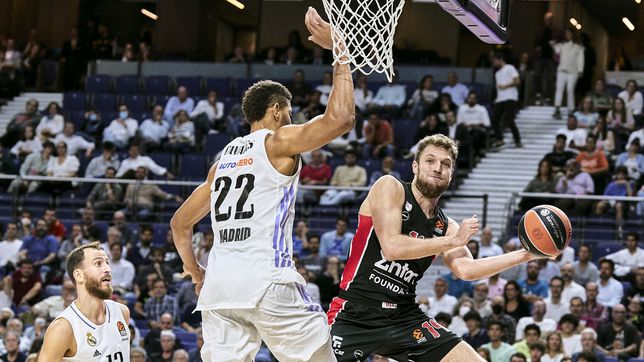 If we asked fans from all over Europe which is the best possible face-to-face today, the list would be long; but Olympiacos-Madrid tonight in La Paz y la Amistad, according to objective criteria, can be elevated to the best game on the continent. The leader, Real Madrid (13-6 record), against the standout from the chasing squad, Olympiacos (12-7 and average general of +159). A giant pulse between the two teams that score the most points (85.2 for the rojiblancos and 84.4 for the whites) and the two that value the most (104.9 for Oly and 100.5 for Real). Bartzokas’ men are also first in assists (22.1 per game) and balls recovered (8.5) and Chus Mateo’s are leaders in rebounds (38) and blocks (4.5).

Between them they have won four of the last ten titles (2012 and 2013 the Greeks and 2015 and 2018 the Spanish) and they have faced in two of those finals and in multiple decisive battles with something in common: a hard core of players very identified with the club. Spanoulis and Printezis are gone; Nevertheless, his relief has been taken by Sloukas, Papanikolaou and Vezenkov, the last two with a Barça past. In the visitors, Reyes and Carroll withdrew, although Sergios and Rudy still continue. “There is a certain parallelism”Chus Mateo accepts, adding: “The Olympiacos fans completely identify with their team, with some players who set an era and others who are gaining a lot of weight. And they are very well trained because Bartzokas (sixth season at the club) It’s a phenomenon, I really like how he does it. Other players like Walkup, Larentzakis and McKissic have been around for a while and have brought in Peters, Bolomboy… It seems like a super team to me”.

The most applauded by the general managers of the 18 clubs in the survey that the Euroleague presented two weeks ago, which they clearly saw in the Final Four, the same one from which they took Madrid. One more incentive for the whites to try to punch the table while defending the leadership against a rival who took the Palace in the first leg (87-89). then there was Show end point guard Sloukas ahead of Tavares and an outstanding performance with 23 points and 12 rebounds from VezenkovWhat is it the first in the race for MVP with 23.4 credits. In that list of the most valued, there are five players from both teams in the first 14, something that does not surpass any other clash: in addition to Vezenkov for the locals, there is Sloukas (9th with 17.6); and Tavares (5th with 18.4), Deck (13th with 16.7) and Musa (14th with 15.8) appear.

Precisely Deck returns two weeks later, but Madrid adds three new casualties: Sergio Rodríguez (knee blow), Williams-Goss (fever) and Abalde (ankle sprain). Two point guards and the Galician forward who also works there, so the helm is now in the hands of Llull with the help of Hanga. A great challenge in the best match of “the most difficult professional sports competition that exists”the latter in the mouth of the merengue technician.

Papanikolaou, the relief of Printezis and Spanoulis

Spanoulis (retired in 2021) and Printezis (in the past summer) have been the most recognizable faces of Olympiacos in the last decade, from a team that won two Euroleagues in a row. Both were captains a witness who has caught Kostas Papanikolaouwho arrived at the club in 2009 with a transfer from Aris that was around a million euros with only 19 years and a salary of more than a net million. He was the new white blackbird of Greek basketball and, after four seasons in Piraeus, he signed for Barça (2013-14) and then went to the NBA for a year and a half (Houston and Denver). In January 2016, he returned home and has already spent twelve seasons at the club, still at the age of 32. “Olympiacos is huge and I feel part of it”, says the new rojiblanco captain. “Spanoulis and Printezis are sorely missed. I learned a lot from them and now I feel more mature, I understand the game better”. The team played the last Final Four five years after the previous one, in 2017. The secret of returning to the elite? “The work ethic and the atmosphere in the locker room”.