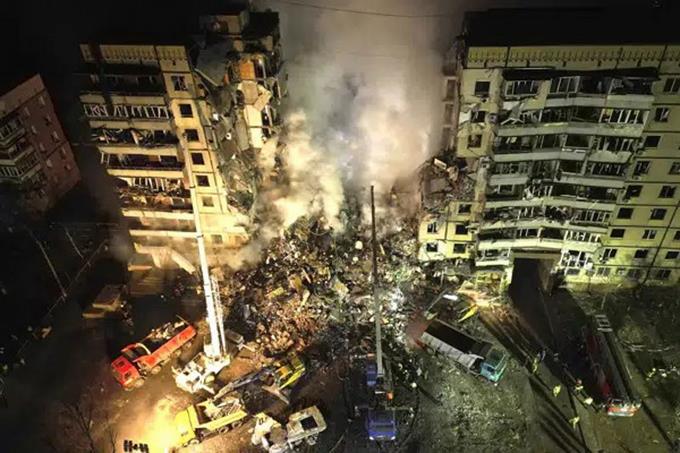 Rescue teams in Ukraine continued to pull survivors from the rubble of an apartment building hit a day earlier by a Russian missile in the southeastern city of Dnipro, as the death toll rose to 29 on Sunday, authorities said. .

It was the worst Russian attack on several cities on Saturday. The shelling also targeted the capital kyiv and the northeastern city of Kharkiv, ending a two-week lull in Russian attacks on Ukrainian power infrastructure and urban centers.

Russia fired 33 cruise missiles on Saturday, of which 21 were shot down, according to General Valeriy Zaluzhny, commander-in-chief of Ukraine’s armed forces.

In Dnipro, workers used a crane to try to rescue people trapped on the upper floors of the apartment tower where some 1,700 people lived. Some residents called for help with lights on their mobile phones.

President Volodymyr Zelenskyy reported on Sunday that at least 73 people were injured and 43 were missing, and 39 people were rescued.

“Search and rescue operations and the dismantling of dangerous structural elements continue non-stop. We continue to fight for every life,” the Ukrainian leader said.

Ivan Garnuk was in his apartment when the building was demolished and said he felt lucky to have survived. He described his surprise that the Russians attacked a residential building with no strategic value.