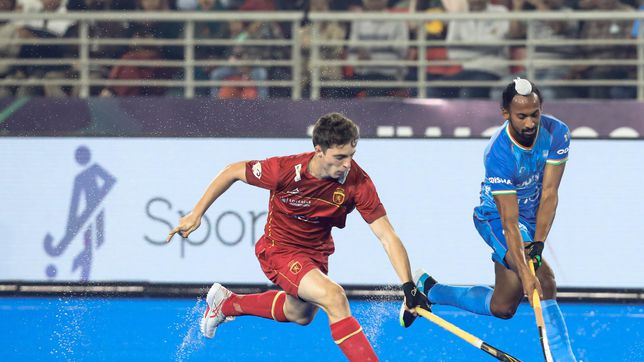 In a magical atmosphere, in the closed night in India and with a packed stadium, the host team presented its candidacy for the world title with a great game against a Spain that was one step below in all aspects and paid for his youth (only four players had experience in a competition of this caliber). Although the precedents were favorable to the National Team (two victories and a draw), India developed great hockey, with a lot of pressure and a technical game, which was a web from which Max Caldas’s team did not know how to get rid of it until the last period, when the meeting was almost sentenced. The Spanish team will face Wales this Sunday at 12:30, a team that lost 5-0 to England. Victory is vital to move on to the round of 16.

The beginning of India was overwhelming. After the first approximation of Álvaro Iglesias at 40 seconds of play, the field fell for the locals, who had 77% possession and had up to three penalty-corners in the first 15 minutes. On the right side, where all the attacks were focused, India found a direct highway to the goal defended by Adrian Rafi. The domain evolved into clear scoring chances with four minutes to go in the first quarter: a play in which Pepe Cunill was disqualified for two minutes and left Spain behind. The first penalty-corner was missed, but not the second. Amit shot Rafi. 1-0. With a minute to go, Spain bailed out water in the middle of the storm.

The second half started the same way. The Asian players, who were already bronze at the Tokyo Olympic Games and who have prepared thoroughly for this World Cup, showed their technical quality and good physical condition, with fast, strong players and aggressive pressure that left Spain without options. to reach the rival area. In one of those isolated actions, Clapés forced a penalty-corner that almost transformed Pau Cunill. It was deflected by the Indian goal just like another shot later. Everything would have changed with that 1-1. Spain was getting desperate, but it made it 2-0 in an attack on the left by Haroik. Pure speed.

Technical errors by a nervous Spanish team, too withdrawn against India, penalized Spain. The host team penetrated with flick (long passes) in defense. A loss by Gispert ended up becoming a penalty-stroke committed by the Catalan player himself, but Rafi guessed Harmanpreet’s intention. One of the referees consulted the video arbitration to make sure that the ball had not entered. His eye was clinical. Spain maintained the 2-0 lead and the options of getting fully involved in the duel if they scored a little more. “Play, play,” Caldes repeated from the bench.

But that moment, and despite the fact that Spain moved the ball better, did not arrive. India withdrew when one of their players was sent off for ten minutes for a too aggressive tackle, and Spain penetrated especially from the right side through Quique González. He even had up to three more penalty-corners, but if it wasn’t the Indian goalkeeper (both alternated in each period) it was the failure to receive some young players who lived their first international experience in an environment not to be forgotten. The World Cup has only just begun and Spain hopes to mature as the days go by. The premiere and the nerves must be left aside in the magical and devoted India to hockey.