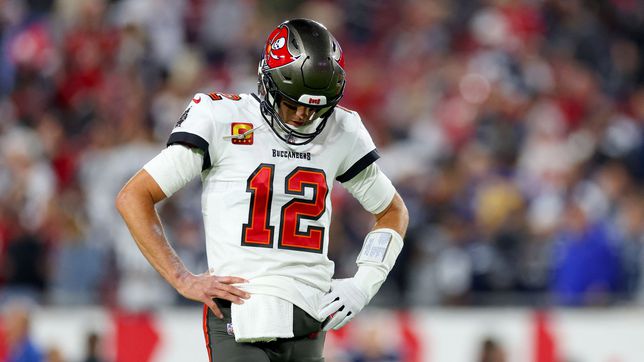 Tom Brady’s 23rd NFL season came to an end this past morning after his Tampa Bay Buccaneers were overwhelmed in the Wild Card round by the Dallas Cowboys (14-31). In a disastrous match that sums up what the year for Florida has been, Brady and his team were unable to compete against some Cowboys who will meet the San Francisco 49ers in the Divisional round. Those of Dallas, lucky for them, they were not affected by the terrible success of their kicker, Brett Maher (1/5 in one-point conversions)and enjoyed a stellar Dak Prescott.

This abrupt elimination in the first round of the playoffs once again ushers in a time when Brady’s future is once again up in the air. The best quarterback of all time already sent a notice last year when making his retirement official, although 40 days later he changed his mind. He returned to the Buccaneers to play a season that has not been easy for him both on the field, where He has had problems and few resources to lead a team that finished with a balance of 8-9 (the first time in Brady’s career that he has recorded more losses than victories in a campaign), as outside the green after announcing his divorce with Gisele Bündchen.

The reality is that Tom Brady will be 46 years old on August 3. A few months before, his contract with the Tampa Bay Buccaneers will expire and he will become a free agent, being able to sign with any NFL team. The most successful player in history will have to make a decision in the future with three possible options: retire permanently, re-sign with Florida or find a new team. His goodbye to the league is not certain, and it is that from the United States it has been pointing out that the Californian has the strength to continue another season. “Now I’m going home and I’ll sleep well. Everything in its time”, Brady said at a press conference after the loss to the Cowboys when asked about his future.

In case he decides to play another year, it seems difficult to see Brady renewing with the Buccaneers. In fact, he has already been linked to some other franchise, such as the San Francisco 49ers (a team he was a fan of as a child). The last words of the quarterback before the media sounded goodbye: “I love this organization. It’s a great place to be. Thank you all for welcoming me. I am very grateful for the respect received and I hope I have returned it.” The union between Brady and those from Tampa Bay seems to have definitely worn out in this third season together after an unbeatable start when they won the Super Bowl in 2020. The Buccaneers have shown themselves to be a very weak team all year, something rarely seen in a set commanded by Brady. The arrival of Todd Bowles to the coaching position upset the plans of a franchise that displayed a zero running game, with all the weight of the attack in the hands of the 45-year-old quarterback.who did not have the necessary weapons.

All the problems that Tampa Bay had been dragging were evident in the Wild Card game against the Dallas Cowboys. Despite playing in front of their home crowd, the Buccaneers’ offense was unable to trouble a Dallas defense that felt very comfortable. The first two times they had the ball, the locals barely added three yards, and in third position an erratic decision-maker Brady was intercepted when he was looking for the end zone. Dak Prescott, visiting quarterback, became the master and owner of the game with four consecutive touchdowns (three rushing and one passing). At halftime, the score reflected a blushing 0-18. In 48 games that he has played throughout his playoff career, he was only the second time a Tom Brady team had gone to the locker room without scoring a single point. The first time it happened was in the Californian’s postseason debut, back in 2001.

With a new touchdown after the break, the Cowboys were up to 24 points that seemed impossible to overcome, and that is that the Buccaneers have only exceeded that scoring figure (not unreasonable, by the way) in two games this season. In a game that had little history, attention was drawn to Dallas kicker Brett Maher with an episode of misses that is now NFL history. The kicker missed the first four conversion attempts for a point (must be hit from 33 yards and he was 50/53 this year), becoming the player with the most missed passes in a game, regardless of playoff or regular season, since at least 1950 (date on which this statistic began to be recorded). The previous record for most errors on a one-point conversion in a playoff game was two, and Maher doubled it with a series of misses that even his teammates couldn’t believe. Cowboys coach Mike McCarthy confirmed at a press conference that Maher will not be fired and that, instead, they will look for solutions before the game against the 49ers. “We need it”.

Brady, with the game seen to be judged, scored two passing touchdowns that minimally made up the bulky result. They may be the last given by the best player in history in his legendary career. His assault on the eighth ring has been frustrated in a year to forget, but no one would be surprised if the GOAT returns wanting more. Pending their decision, the NFL playoffs will continue this coming weekend with the Divisional round (quarterfinals). The Dallas Cowboys, who now see themselves as capable of anything with a stratospheric Dak Prescott, They will travel next Sunday (00:30 from Spain) to Santa Clara to face the San Francisco 49ers in a duel between two historic franchises (each has five Super Bowls). It will not be easy for those from Dallas against the fittest team in the NFL: led by the sensation Brock Purdy, those from Bahía have accumulated 11 consecutive wins. The show is more than served.