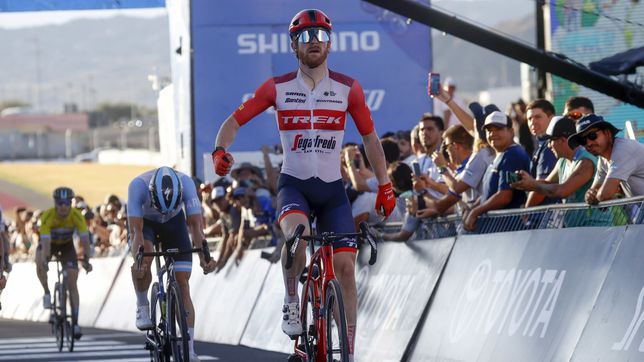 It was not the Ducati of Álvaro Bautista, nor the Yamaha of Toprak Razgatlioğlu, the last winners of the Argentine Grand Prix held at the San Juan Villicum Circuit as part of the Superbike World Championship since 2018. A Trek Madone was the one that crossed the finish line first at the San Juan racetrack, that of a Quinn Simmons who gave the bell about the huge team of sprinters in the Argentine event. The American (21 years old), one of the young talents of his country, surprised with an attack before reaching the last kilometer with which they could not get hold of him. Sam Bennett, who in the group sprint was beaten by a Max Richeze who would have retired big time, he retained the lead with his third-place finish.

In this third stage, another small twist as far as the harshness of the conditions is concerned. Extreme heat, with 40º, and superior thermal sensation on the asphalt of the autodrome. Day of those in which there is little desire to be a cyclist… Despite this, five brave men launched their attack with the starting signal to establish the escape, once again, with Latin prominence: the Argentines Marcelo Méndez, Emiliano Contreras and Mauricio Domínguez, and Chileans José Luis Rodríguez and Manuel Lira. Absolute consent of the peloton, which did not stabilize the difference until it reached 5 minutes. After many kilometers of pursuit, the chasing group, which seemed to be in no man’s land, ended up making contact to add three more members in the lead.

The sprinters’ teams were forced to react gradually so as not to compromise their sprint options. And there, for the third consecutive day, the figure of Vinicius Rangel, the only Brazilian on the World Tour who in the Argentine test is leading the pack for many kilometers to hunt down the breakaway. Thanks to the fabulous riding conditions of the Movistar rider, the neutralization occurred 35 km from the finish line. Another sprint loomed on the horizon…

However, for the benefit of the show, the script is not always fulfilled. With the compact group -despite a pileup in the peloton without consequences due to a hitch- and Evenepoel making advance in the closing stages of the San Juan Villicum Circuit, Simmons, the climber from Durango, started the bike with a lot of confidence. And although they were hot on his heels over the finish line, they couldn’t pass him, so Simmons became the second youngest stage winner in the Vuelta a San Juan, in addition to the first American who inscribes his name in a stage of the Argentine career. As he acknowledged at the end of the stage, he planned the winning maneuver the day before together with his coach. We all love when plans go well.

Results and general of the Vuelta a San Juan (3rd stage)

This is how an F1 seat is made