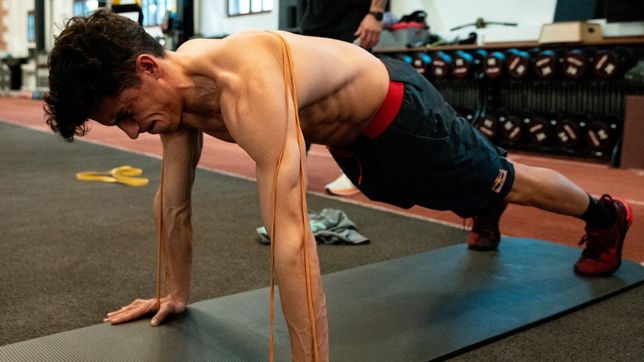 There isn’t much left for MotoGP to start its engines again, on February 10 the first tests of the year begin in Sepang, so it’s time to face a decisive phase of physical preparation to get to the top of the preseason. in that goes a Marc Márquez who gives a good account of his training on social networks: motocross, running, a lot of gym and even runs on asphalt with a Honda CBR600RR. It is being one of “Marc’s best winters” in the words of Alberto Puig, his boss at Repsol Honda.

“For the first time in a long time, he has not gone through the operating room, and that is very important. She has rested, but she has trained a lot ”, Puig analyzes his pilot in statements to Motorsport. Very good news for the ilerdense that makes him get closer to the objective that he set after the end of last season, to recover one hundred percent of his punished right arm, something that the main team takes for granted: “Marc is the same as always, with the same mentality of going out to the top from the first moment ”.

With Márquez’s physical preparation going well, “Now what remains is to check the potential of the bike” that, obviously, “we must improve”. “The Valencia test was not what we expected, but Honda neither stops nor gives up. It will take more or less, but we will find a competitive bike. The priority is for Marc to have a motorcycle to win”, promises Puig, who assures that “The change will not be as radical” in Honda compared to 2022, but they must “improve in several areas.”

The role of signings

A one hundred percent Márquez is key for Honda, but so will the performance of his new men from Suzuki: Mir and Rins. After getting “a rough impression of what the Honda is” in the post-season tests in Valencia and giving them his point of view compared to the Suzuki, Puig says what he expects from the Mallorcan in their first year together: “We have to give him a bike that works, but if you are in an official team like HRC, what is expected is that you win.”

With Rins, with whom he will continue to share the brand, something similar happens because, although “he was signed by LCR, he is also an HRC pilot”. This means that he will have factory material despite wearing the colors of the satellite team of the golden wing, given that “Honda wants all its pilots to have the same material, the priorities are set by the results and the classification”, as Puig explains. Therefore, the work of the three Spaniards and that of Nakagami, honda pilot, It will be crucial to redirect the situation of the Japanese firm.