Margarita, it is her name, but she answers by Margot’s. This is how they meet the lady who sells majarete in the area of ​​La Mata, on the way to the community of Cotuí, Sánchez Ramírez province. She is a woman of almost 60 years, at least it shows in her worked hands, with more body weight than normal and with a spirit that is only characteristic of those who live day to day selling something to cover their precariousness.

At that time of day, 1:00 in the afternoon, Margot stands in front of a glass case to accommodate plastic cups and other canteens of the same material and of different sizes filled with majarete, a soft corn smoothie put to use. the kitchen with spices and sugar, cow’s milk and coconut milk and a pinch of salt, he says, making signs on his face of a sting of eyes.

It seems that this is part of the “trick” so that those who cross that road that goes to or from Cotuí will like his majarete.

Margot is on the sidewalk with her display case, a chair with a pot with five or six ears of corn already half dry per hour and a little further from the sidewalk she has a “stove” with firewood and a large pan in which cook the preparation for an arepa with sweet that the smell of cinnamon, nutmeg, vanilla, butter and coconut reveals. Because the arepas are made with sugar and they are also salt.

It is practically the aid of a breakfast, a lunch or a dinner for the travelers of that area. 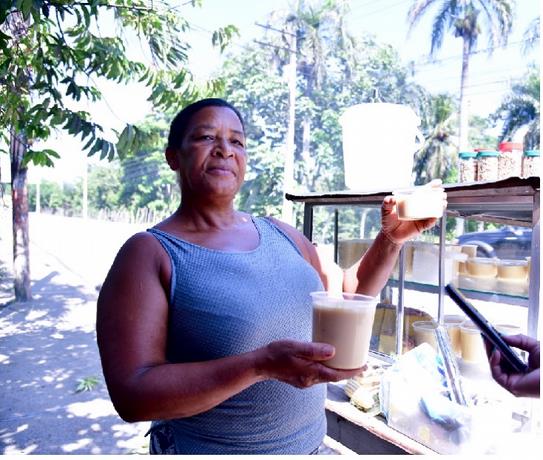 Margot, like many women already with a large family (children and grandchildren) does not like to stay at leisure, and even less she who pays rent and supports herself from what she produces. She lives in the countryside, where there is never much work and now the pandemic is worse, she says.

He has been grading corn for ten years for his preparations. Only now it has been modernized and makes less effort because it has an assistant in the business and an electric blender where it blends the corn kernels and only has to strain it with water, as it does with coconut.

The work that looks easy has been facilitated, but it requires getting up with the roosters, cutting the grains of the ears that you have bought, because you have no conuco, split the coconuts and “throw them” to scratch them in the blender, carry bottles of water and the firewood and cauldrons that you will use for the day.

It is that Margot is not located only on the sidewalk. At his back he has an area almost close to a skidder where he has his firewood and a small guano chair, and a few steps from the fire a small place for which he pays a monthly rent.

It is not that it looks like a pretty place, but it is clean and the smells emanating from the cauldron in which the arepa is cooked are pleasant; cinnamon, coconut and baby corn. It is known that the arepa is sweet because the smell is different from the one made with salt.

The plastic cups of majarete have different prices, from RD $ 35 to RD $ 60, RD $ 75 and RD $ 100. He also sells “el concón” del majarete that he says is highly sought after and there is hardly ever because it sells very quickly. There are people who even commission it.

He has been in this position for two years. Four or five months after the start of the Covid-19 pandemic or, at least, since he learned about the virus.

In his business he has ventured into the “Chacá”, another preparation of corn, but it does not scratch, but the grains are broken into small pieces. She sells corn on the cob and also boiled.

“I make arepas with salt and sugar. Many people call them cakes, but in reality cakes are small. These are arepas, he says.

Exhausts a schedule that begins from six to seven in the morning if you have to cook in that part of the road. His young assistant is a girl who receives classes at the Lyceum and only attends her two to three times a week.

The pieces of arepa cost RD $ 75. There are times when you have to peel and shell and then liquefy the kernels of 50 ears of corn.

As everyone has their space in life, he says, he accommodates a friend who prepares cashew seeds and puts them on top of the display case also for sale at RD $ 150 for the small pot and RD $ 250 for the large one.

“I pay a house and also RD $ 4,500 for this place,” Margot indicates with her hand towards the small room with a door and a window and a counter and a weight of measurements inside.

The arepas are cooked on a wood stove and the majarete on a gas stove.

Margot is part of the high percentage of informal workers, independent workers and even entrepreneurs who, since before the pandemic, make up the bulk of the productive sector of the Latin American region, considered the second most unequal in the world, where women suffer great deficiencies, inequalities and family and social pressures.

The Dominican Republic does not escape this, where labor informality exceeds 50%, despite economic growth, often due to the lack of training for the new economy, others due to gender and age discrimination for formal hiring.

In Latin America and the Caribbean there are at least 140 million people working in informal conditions, which represents around 50% of workers.

In the case of the Dominican Republic, according to official estimates, informal employment fell from 58.6% to 47.9% between 2005 and 2010, as a proportion of total non-agricultural employment, especially as a result of reforms in the social security system, which expanded health system coverage. With the pandemic, self-employment increased in almost every country in the world.

Margot, like so many other Dominican women with low education and in the older adult range, add to the statistics that place this informal female labor segment in 87% of those who do not have any level of education and in 74% of those that count with a primary education level.

Grayscale report: Metaverse could be worth more than $1 trillion in coming years