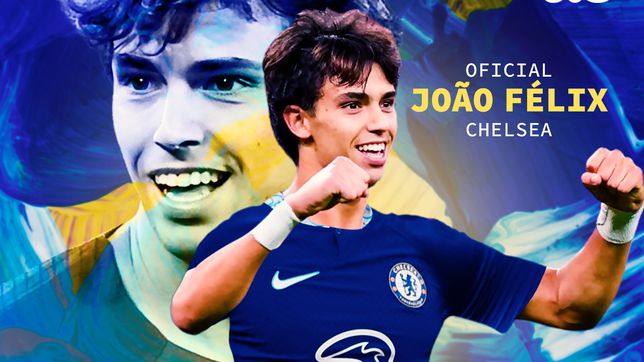 João Félix’s adventure at Atlético is over, at least until the summer. It’s official: the Portuguese will play for Chelsea until the end of the season. He leaves on loan and without a purchase option, despite the fact that the London club tried to include it. The blue team takes charge of the footballer’s salary and, in addition, disburses for the loan an amount that is around eight million euros. The striker will return to Atleti in the summer and with a contract until 2027, because before leaving for the Premier he has extended it for another year.

In this way, João Félix said goodbye to Atlético with the match against BarçaAt least this season. The 23-year-old striker arrived at the Metropolitano in 2019, after Griezmann’s departure to Barça and as the most expensive signing in the club’s history (127 million). Since then, he has played 131 games with the rojiblanca, he has alternated starts (84) and substitutions (47), brilliant moments with other more gray ones and several injuries that have slowed him down when take-off was intuited. In total, he has contributed 34 goals and 16 assists. But his relationship with Simeone has never been the most fluid and the player has understood that this was limiting him.

The footballer asked for a change of scenery

for all that, João Félix let the club know his desire to leave the team in this winter market and Gil Marín himself expressed his discontent, directly alluding to the complicated relationship between the footballer and the coach. “I would love for him to continue, but it is not his idea. The reasonable thing is to think that he will leave ”, commented the CEO on December 6, while João Félix was participating in the World Cup.

On the return from Qatar, the Portuguese was one more in Simeone’s plans. He started against Elche and Barça and missed the Cup matches against Arenteiro and Oviedo due to physical problems. El Cholo opted for him along with Griezmann for the attack and the 7 scored a goal against Elche (the fifth of the season), although against Barça it went more unnoticed. However, despite this final rush, the disagreements with the coach have been key and João did not change his mind.

Atlético agreed to open the exit door for him, but it was clear that they were not going to undersell their great bet of recent times. There was no way he was going to transfer João Félix for less than 100 million, a significant amount that, especially in the winter market, is difficult for any club to achieve. There were interested teams, but no concrete offer. A) Yes, Atlético also enabled the transfer route, always with financial compensation from the destination club, which also had to take care of the salary.

Chelsea, the most determined: “The artist has arrived”

And so it has been. Although Chelsea’s interest comes from afar, it has been an express operation. “The artist has arrived”, they announce it on their social networks. João will wear number 11. During the weekend there were informal contacts and on Monday they were already official. The Stamford Bridge club accelerated past other suitors, because it needed posh reinforcements. Graham Potter’s team has recently taken two hard blows against City, which has knocked them out of the Cup and has left them in a hurry in the League, tenth and ten points in the Champions League. United also knocked on that door, but the proposal was insufficient for the people of Madrid.

The loan implies that João Félix will return to Atlético when the season ends. And then the conversations will be reactivated, because nobody knows what will happen this semester. The Portuguese has a contract until 2027 (with the extension he has partially reduced the annual amortization) And what happens in the summer will depend to a large extent on Simeone’s continuity on the bench, linked to the club until 2024.

But Atleti looks to the shorter term. The departure of João Félix, after Cunha also left, forces the sports management to look for a striker who can contribute goals and compete for the position with Morata, Griezmann and Correa. The club has several options in mind (Memphis is the main one, Ünal, Thuram…), although it will also have to do the math in a market that offers few bargains in forwards. Assignments or market opportunities are sought. A new soap opera that will resolve before the end of the month…

Salary, possibility of teleworking, diploma required… Here is the best job in 2023