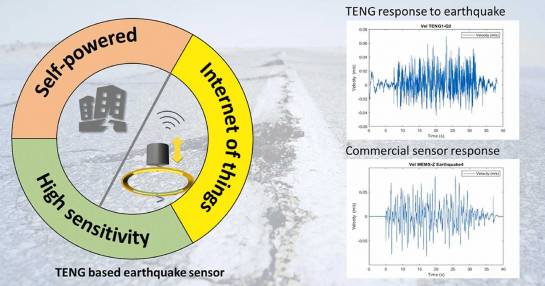 With the idea of ​​improving seismic monitoring systems and, consequently, also information to the population and the competent authorities about the seismic risk, researchers from the Polytechnic University of Madrid (UPM) and IMDEA Materials manufactured and tested a new seismic sensor based on triboelectric effect.

This effect is a type of contact electrification in which certain materials become electrically charged after being separated from another material. Rubbing plastic on the skin or hair, for example, can generate triboelectricity, which also appears when balls of white cork or polystyrene are glued to different surfaces. The new sensors act as triboelectric energy nanogenerators (TENGs).

This new seismic sensor can be used to detect earthquakes and warn of dangers through a very economical system, with very low consumption and resistant to adverse conditions.

The researchers, led by José Sánchez del Río del Research Group on Advanced Structural Materials and Nanomaterials UPM, tested at the Center for Studies and Experimentation of Public Works (CEDEX) the ratio of vibration measurements obtained with the sensor placed on the surface of a vibrating table, in comparison with those obtained by microelectromechanical systems (MEMS) normally used in the network National Institute of Seismic Sensors from the National Geographic Institute (IGN), with which they have also collaborated. 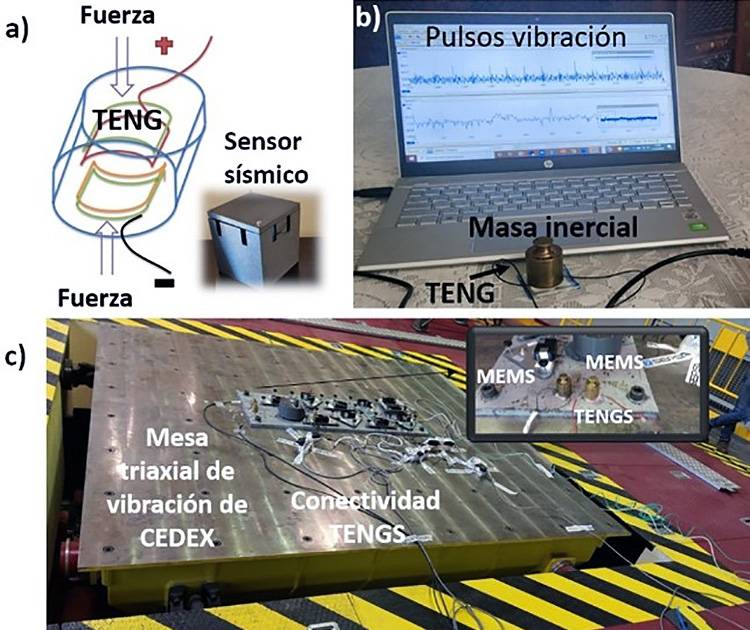 a) Working principle of a triboelectric energy nanogenerator (TENG) and seismic sensor. b) Signals generated by vibration. c) TENG and MEMS in the CEDEX table. /UPM

The results, published in in Nano Energy magazine, showed great similarity between the two signals, which demonstrates the usefulness of the new device. They also revealed that, within a seismic network, this sensor can detect earthquakes thousands of kilometers from their epicenter with great sensitivity and precision.

In addition to being resistant to extreme conditions, each sensor can communicate information about seismic activity over long distances, up to 20 kilometers from where it is located in interurban areas, and this information can also be viewed on any device with internet.

The new seismic sensor, already patented, has as main elements the triboelectric transducers. These transducers are manufactured in the IMDEA Materials laboratory led by researcher De-Yi Wang.

They are formed by two layers of polymeric material that, through different chemical treatments, present opposite electronegativity. The moment these layers come into contact, high voltage electrical energy is generated, without the need for any external source. That’s why these sensors are TENG.

The seismic detector is also composed of an inertial mass that is positioned on the triboelectric transducer, allowing the vibration to be detected in the Z axis of space.

Very low amplitude and high frequency vibrations are detected, and the signal can be transmitted over long distances and visualized via the Internet of Things (IoT)

The Department of Industrial Mechanical Design of the ETS of Engineering and Industrial Design of the UPM (ETSIDI-UPM), led by Francisco Santos Olalla and Rafael Cascón Porres, is currently responsible for the mechanical design for 3D detection, together with student Alba López Laguna. In addition, the new seismic sensors, with their high sensitivity, are capable of detecting vibrations of very low amplitude and high frequency.

José Sánchez del Río, together with David Patrizi and Álvaro Merodio, verified that vibration signals can be transmitted over long distances and also visualized on the Internet through the Internet of Things (IoT).

Sánchez del Río summarizes the advantages of the new seismic sensor. “It can be used to detect earthquakes and warn of dangers through a very cheap system, with very low consumption and resistant to adverse conditions. Potential users range from large corporations, small and medium-sized businesses or interested individuals, as well as those responsible for national earthquake detection systems.