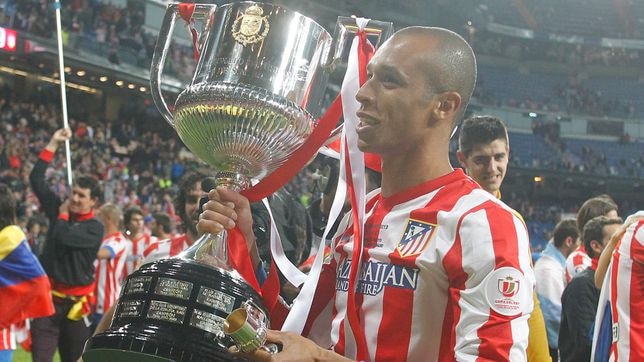 Joao Miranda retires. One of the mainstays of the successful first stage of Cholismo at Atlético, the hero of the Bernabéu Cup in 2013, hangs up his boots at the age of 38. “From Paranavaí to the fields of the world”, says the central defender in his farewell message. Coritiba, Sochaux, São Paulo, Atlético, Inter, Jiangsu Suning, again São Paulo and the Brazilian team have been the teams of his professional career, in which He has played more than 800 games and has won 12 titles.

“Miranda, fuck the ball!” was one of Simeone’s first phrases as Atlético’s coach. The Argentine arrived in the middle of 2011-12, the first season in the Brazilian team, still questionable after having arrived with the letter of freedom. With Cholo, the center-back formed a mythical couple with Godín, 140 matches together, within a defense that was recited on a run with Juanfran and Filipe on the sides. As a rojiblanco he won five titles: a Europa League (2012), a European Super Cup (2012), a Copa del Rey (2013), a League (2014) and a Spanish Super Cup (2014), until he left for Inter in 2015. He also won titles with São Paulo (three Leagues), Jiangsu Suning (one League) and Brazil (one Confederations and one Copa América).

All in all, his great night at Atlético, a photo for history, was the 2013 Cup final, against Real Madrid at the Bernabéu. The center-back scored in extra time, with an accurate header from Koke’s pass, the goal that gave the rojiblancos the title and broke a curse of 14 goals without winning in the capital’s derby. “It is the most important goal of my life”, he has always maintained.

“If football were a person, after everything I have experienced, I would say that it has been exciting and that we have experienced something inexplicable. But the time has come to be João Miranda. I will continue to be passionate, but in another way, which is as an amateur ”, He explains in the statement that he has uploaded to his social networks, where he has also conveyed his gratitude to Atlético.