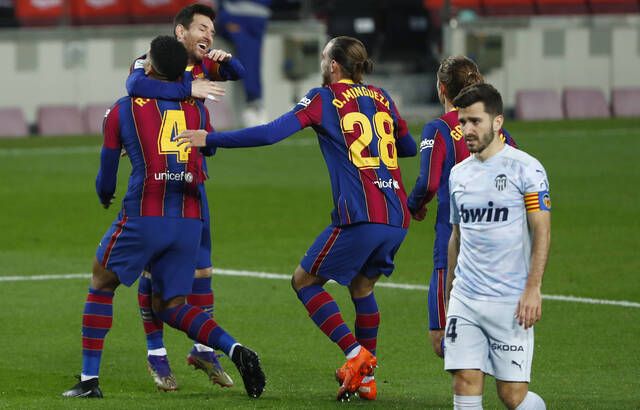 Leo Messi always higher. The Argentine scored his 643rd goal with FC Barcelona this Saturday, against Valencia, equaling the record of goals scored by a single club of Rei Pelé (for Santos). This famous goal took a long time to happen.

Messi in fact, he missed a penalty early in the game, before finding the header flaw, allowing Barça to draw before the break.

Despite this new record, the Catalans did not have a good afternoon. Holding Valencia (2-2 final score), they have been stuck in La Liga with a 7th game without a win in 13 games (3 draws, 4 losses) since the start of the season. They are now in fifth place, eight points behind the leader, the Atletico Madrid (Elche 3-1 winner).

After showing encouraging advances against Levante (1-0) last weekend and against Real Sociedad (2-1) on Wednesday, the Catalans returned to their fouls: an offensive game that lacks efficiency and a very defensive defense. quickly dominated by opposing offensives.

The title “not yet lost” for Koeman

“What worries me is that sometimes the team doesn’t know what the game is asking for. We know that we are a team that always likes to attack and score goals, but there are also times when we need to defend and control the game. I saw the team doubting, yes. But the title race is still not lost”, Koeman said at a news conference after the match. This draw does not please the Valencian team, caught in financial problems and stuck in 12th place in the League, four points from the red zone.