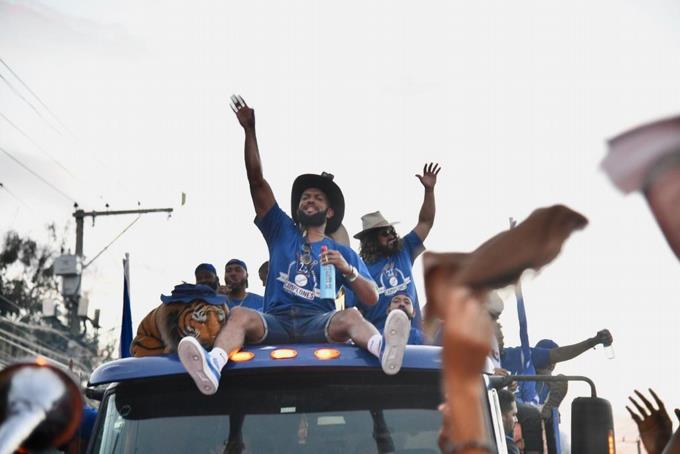 With their duty done, the Licey players were getting ready to celebrate in a big way the achievement that the franchise had reached for the last time in 2016-17.

From early on, some of the heroes of the conquest of the Tigres’ 23rd crown began to arrive at the Quisqueya Juan Marichal, after defeating the Stars 4-1 in the final series.

“Without a doubt this is a great achievement, it had been a few years since we lifted the crown and this time we did it and we will celebrate that big,” said Esmil Rogers, the winner of the third game of the final, which was a shutout. 1-0.

“We had full faith that this time the trophy would remain between us and thank God that it was that way,” added the pitcher, who this year recorded one of his most outstanding performances.

And along with the players, a sea of ​​high school fans arrived very early at the stadium to support the group of players who were getting ready to celebrate.

“After the success, now it is up to us to celebrate, we gave everything on the field to reach the 23rd crown and it happened this way,” said outfielder Luis Barrera.

“It’s time to celebrate, I had a small debt to the team and our great fans and I was able to hit the important shots that gave the team victory in the last game,” said Mel Rojas Jr, who drove in the two rounds that required the Licey to defeat the Stars 2-1 in the fifth game of the series.

To celebrate in a big way together with their thousands of fans the great success achieved by the Tigers in the conquest of their 23rd crown.

Cuban pitcher Raúl Valdés also participated in the parade and expressed pride for having achieved another championship in Dominican baseball.

For the pitcher, this represents number four, since he has already done it before with Gigantes and Toros del Este.

“It is always important to win, for this we went out to pitch and fight on the mound, now we will prepare to once again give everything in the Caribbean Series,” said the native of Havana, a fighter who already has more than 70 victories in Dominican ball. It had been five years since the blues had not lifted the champion’s trophy.