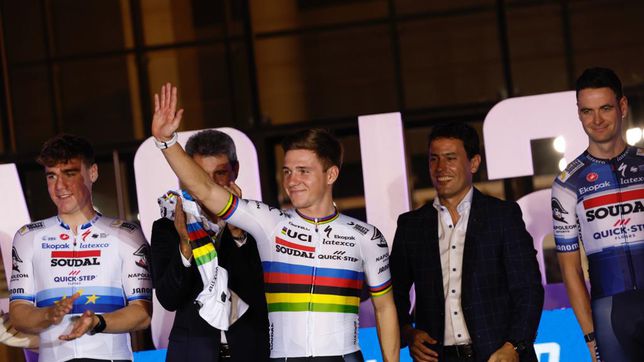 Where everything begins Some words that not only form the motto of the 39th edition of the Vuelta a San Juan, but are also loaded with meaning for Remco Evenepoel. In the Argentine test, the Belgian (who will turn 23 next Wednesday) made his debut as a professional runner back in 2019, premiere that was the first stone on the road for a succession of successes that culminated last September with his achievement of the title of world champion. That precious jersey, like defending champion in San Juan (it won in 2020), it will be the one that will appear from this Sunday on the occasion of the first stage of the South American race, which will mean the start of a 2023 course in which it will have to face the feared ‘curse of the rainbow’ and all the media exposure that comes with carrying the rainbow.

“I’m really excited to start with this beautiful jersey, it is an honor for me. It’s going to be hard to beat again. There is only one stage where there is a chance to win and we are here to get some stages with Fabio (Jakobsen). I will do my job and I will try to enjoy this rainbow jersey ”, Remco explained to the media before the debut, in addition to taking the opportunity to take some pressure off his shoulders due to his enormous favoritism: “Looks like I already won the race without starting (laughs). We’ll try to do our best, but don’t kill me if I don’t win. It is the one of the year, but they are all important. Whether you are the champion or not, you have to give your all in all of them”.

And the Belgian will have to give his best if he wants to aspire to the top, given the good team of rivals he will have to face. Curiously, Remco will meet again in competition with Egan Bernal, just when yesterday marked one year of the terrible accident of the Colombian, with whom he had not coincided since the Giro d’Italia that the Ineos conquered in 2021. “I am recovering. I feel good after the fall. I have trained normally in recent months. I am positive and confident. The numbers have been good in training, but racing is a different thing. It’s going to be a very physical race even though there’s not much mountain. This race is very important for the fans. We, like Ineos, will try to put on a show ”, Bernal confessed about his aspirations in the general of a Tour of San Juan that, except for surprise, will be decided in the fifth stage, with a demanding finish in the Alto del Colorado: 18.8 km at 4.4% average and an altitude that exceeds 2,600 meters.

At that peak it is also expected that runners like Miguel Angel Lopez, who will share gallons in the Team Medellin next to the fireproof Oscar Seville (46 years), Sergio Higuita and Daniel Felipe Martinez be in the battle for the stage win and the overall. The leadership will be much more distributed in the remaining six days, since all these arrivals are ideal to see massive sprints of very high carats between men like Fabio Jakobsen, Sam Bennett, Fernando Gaviria, Peter Sagan, Elia Viviani or Giacomo Nizzolo. Many incentives not to lose detail of this first contact with the competition. There was desire.

Route of the 39th Tour of San Juan