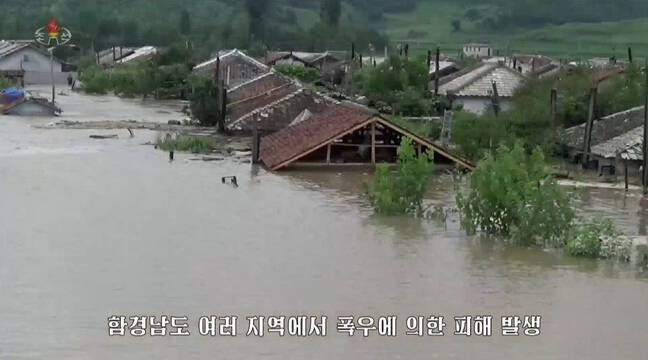 North Korean leader Kim Jong Un on Sunday ordered relief supplies to be dispatched to flood-affected areas of the country, from which some 5,000 people had to be evacuated. Images broadcast by state broadcaster KCTV on Saturday showed houses flooded to roof level, as well as what appear to be bridges damaged by heavy rain. “Hundreds of hectares of farmland” were submerged in the southern province of South Hamgyong, affecting roads and houses after the levees broke, the canal reports.

The bad weather comes after Kim Jong Un admitted in June that his country was facing a “tense food situation.” He ordered the dispatch of equipment and financial support on Sunday to help South Hamgyong province in its campaign to restore normalcy, according to the state news agency KCNA. Officials in that province on Thursday discussed “emergency measures to quickly stabilize the lives of people in the worst affected areas,” he said.

With the soil already soggy, more rainfall could cause even more damage, Ri Yong Nam, deputy director of North Korea’s meteorological services, told KCTV. “We expect heavy rains through August 10 in several regions, mainly near the east coast,” he continued. North Korea is at risk of having to deal with a food shortage of 860,000 tonnes this year, according to forecasts by the United Nations Food Agency (FAO) published in July. The agency warned of “a difficult shortage period between August and October.”

The North Korean regime, under international sanctions for its banned military programs, has long struggled to feed its people and regularly suffers from food shortages. Pressure on North Korea’s economy was increased by the orderly closure of the border to combat the coronavirus pandemic and by a series of storms and floods in 2020. North Korea experienced a very severe famine that claimed hundreds of thousands of lives. as a result of the reduction. in aid of Moscow after the Soviet collapse.