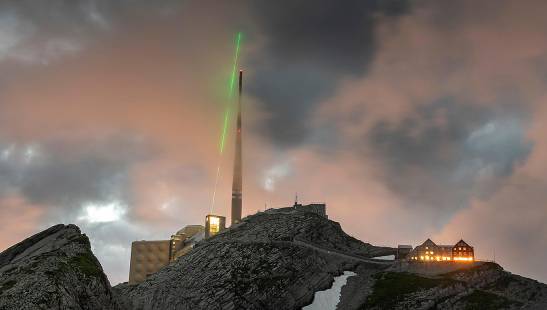 A powerful new laser aimed at the sky can create a virtual lightning rod and deflect the beam’s path, according to an experiment carried out in Switzerland by an international team of researchers.

The study, published in the journal Nature’s photonicscould pave the way for better lightning protection methods for critical infrastructure such as power plants, airports and launch pads.

Until now, the best-known and most common lightning protection device is the Franklin lightning rod, an electrically conductive metal pole that intercepts lightning strikes and conducts them safely to the ground.

Even so, they sometimes cause considerable damage and loss, so it is important to develop better methods of protection. In this context, the new laser beam, which works as a mobile virtual bar, can be an alternative.

“We present the first demonstration that laser-induced filaments – formed in the sky by short and intense laser pulses – can guide atmospheric discharges over considerable distances”, point out the authors, who believe that this advance “will allow advances in protection against lightning and in the lightning physics.

The idea of ​​using intense laser pulses to guide beam discharges had already been explored under laboratory conditions, however, there were no field results to experimentally demonstrate laser beam guidance. To do this, the team led by Aurélien Houard, from the Esta engineering school in Paris (France), carried out experiments during the summer of 2021 on the Säntis mountain in northeastern Switzerland, with the aim of exploring whether a laser could guide a ray.

The experimental campaign on Säntis Mountain was carried out with a high repetition rate terawatt laser; The large car-sized device, which fires up to 1,000 laser pulses per second, was installed near a telecommunications tower, which is struck by lightning about 100 times a year.

During more than six hours of operation in the middle of a storm, the authors observed the laser deflecting four atmospheric discharges upwards, their observations were corroborated by the use of high frequency electromagnetic waves generated by lightning to locate the discharges. Increased detection of X-ray bursts at the time of impacts also confirmed the success of the guidance.

Furthermore, one of the beams was recorded directly by high-speed cameras and was shown to follow the path of the laser for more than 50 meters.

The authors conclude that their findings add to current knowledge about laser physics in the atmosphere and may contribute to the development of new protection strategies against these natural phenomena.