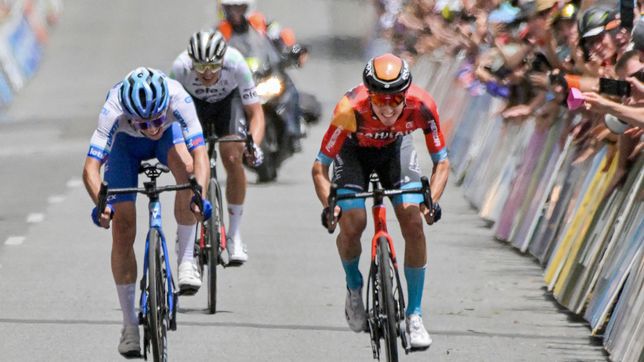 The first races of the international cycling calendar in this 2023 leave us the first points achieved by the big squads of the peloton in the UCI ranking thinking about the triennial ranking 2023-2025, that could determine the next promotions and relegations in the peloton.

A classification that After the first event of the UCI World Tour in the Tour Down Under, he leads the UAE Emirates with 815 points thanks to the 685 points achieved by Jay Vine, 500 of them as the overall winner of the Tour Down Under. To them must be added in addition to 70 points from Marc Hirschi and 35 from George Bennett and 25 from Alessandro Covi

In this classification, Jayco AlUla appears second with 782 points after the 525 achieved by Simon Yates, runner-up in the Tour Down Under, and the 142 achieved so far this year by Michael Matthews. The ranking podium closes this week with Bahrain-Victorious with 495 points, of which 395 correspond to Pello Bilbao after his 60 stage victory and 325 after being third overall in the Tour Down Underin addition to the 60 achieved by Phil Bauhaus with his victory in the first stage.

Good start to the season for the Movistar team as well, which this week appears in eleventh place in the UCI world ranking with 183 points, of which 100 are thanks to Gorka Izagirre’s tenth place overall in the Tour Down Under and 60 for the fourth position of José Joaquín Rojas in the Classica Comunitat Valenciana 1969. The Spanish team faces several races this week in which they can score an important haul of points at the start of the season: the Vuelta a San Juan and the five trophies that make up the Challenge de Mallorca.

Pello Bilbao assaults the Top-10 of the world ranking

The UCI world ranking, which includes the results of the riders in a calendar year, continues without major changes this week with Tadej Pogacar as the leader ahead of a Wout Van Aert who is still in the cyclocross season and a Remco Evenepoel who could close the gap depending on the points he can score in the Vuelta a San Juan.

The great novelty this week in the classification is the entry into the Top-10 of the Spanish Pello Bilbao, who after his stage victory and his third place overall in the Tour Down Under, climbs ten positions this week to situate seventh in the ranking with 2,251 points. A Top-10 of the ranking from which Mathieu Van der Poel comes out, who like Van Aert continues to compete in the cyclocross season, while Alejandro Valverde appears in twelfth position, just after the Dutchman, thanks to his results achieved in the 2022 season despite the fact that he is already retired as a professional.