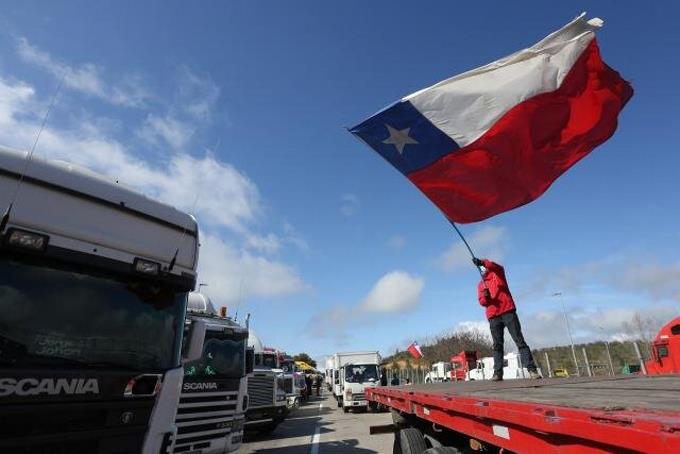 The truckers’ strike in Chile completed its fourth day on Thursday without giving in to its claims and in the partial occupation of the country’s main highway, through which practically all of the national cargo is mobilized.

The challenge to the government of President Gabriel Boric from the transport sector raises better safety conditions on the roads and a reduction in the price of fuel, while alerts grow about an upcoming shortage.

Representatives of supermarkets and large businesses warned that shortages will begin to be noticed over the weekend if the movement does not stop. From some gas stations in the north of the country, they began to launch complaints about lack of fuel.

The work of cargo drivers is vital in Chile, a country with a narrow geography, because it mobilizes around 95% of the merchandise, such as food, construction materials, machinery and the like, it is mobilized through the 3,300 kilometers of the Route 5 or Panamericana, which connects the country from north to south.

The union still has more than 40,000 truckers, of which 30,000 are small and medium. The truckers who have joined the stoppage are from the north of the country, although there are also from the center and south.

Boric warned before the strike that he will act “with all the force that the law grants us” if the road blockade persists. He referred to the issue in Mexico, where he is making an official visit.

The president’s warning is added to the presentation of more than twenty complaints against truckers under the State Security Law, which establishes sentences for these cases that range from 61 days in jail and can be extended to 540 days.

The strike began on Monday led by small truckers from the north of the country, to which carriers from the center and south have been added. They demand the setting of the value of a liter of diesel for six months, an end to the weekly fuel increases and greater security on the roads where, they say, robberies and assaults have increased, and the installation of “rest areas” in the route.

The government describes the demand as “disproportionate” and affirms that freezing diesel values ​​for half a year would cost about 2,500 million dollars.

The same day that the stoppage began, the government offered to truck owners and the cargo carriers confederation to set diesel for three months and, after that period, raise or lower prices by the equivalent of about four cents each. two weeks. It currently costs $1.2. The offer is studied by both unions.

If accepted, the measure would favor all those who use fuel, although mainly the truckers themselves with tax benefits that allow them to recover most of what they pay for special fuel taxes.

It is the second trucker strike that Boric has faced. The previous one, in April, he deactivated it by imposing a state of emergency that allowed him to use the military to monitor the routes of two southern regions affected by violence.