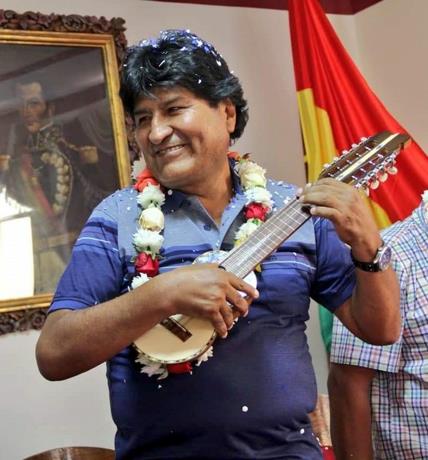 The former president of Bolivia Evo Morales (2006-2019) opened an account on Tik Tok in which he has already published two videos, one of them is the welcome given by the president of ArgentinaAlberto Fernández, to that social network.

"Dear sisters and brothers, I am with my dear brother and friend Evo Morales, I invite you all to follow Evo on the Tik Tok pagea huge Latin American that Bolivia has given us"says the Argentine president.

In the video Fernández appears next to Morales, in the middle of the two an image of Maradona dressed in the uniform of the Argentine team carrying the world cup, and in the background the song "The hand of God".

In the other video, Morales plays with a child who receives him upon his arrival in Chaco on the Argentine side.

This Sunday marks 14 years of the Plurinational State, which was promoted by Morales when he first assumed the Presidency in 2006, and was one of the great absentees at the commemorative events in which President Luis Arce gave a speech, in which he recalled that the former president was the first indigenous president of Bolivia .

Morales announced last weekend that he will visit Argentina to celebrate the Day of the Plurinational State of Bolivia, together with the Bolivian community in that country.

In addition, he will participate on Monday in a meeting of "social movements" within Runasur, the international platform of social and indigenous movements that promotes, as a preamble to the VII Summit of Heads of State and Government of the Community of Latin American and Caribbean States (Celac) to be held in Buenos Aires on Tuesday .

He also said that he will consider creating a "Coordinator of the Social Movements of Latin America and the Caribbean" that brings together all the unions and regional international networks to "deal" to the "empire".

Before embarking on his trip to Argentina, Morales expressed his annoyance the day before for what he considered a "mistreatment" the fact that he had not been invited in advance to the events for the Day of the Plurinational State. AND

"Sisters and brothers: despite the mistreatment and discrimination of opportunism that seeks to manipulate history and take advantage of the struggles of the people to improvise a renovating political project of the right, I call to defend the unity and ideological conviction of the MAS-IPSP"wrote the also leader of the ruling Movement for Socialism (MAS).

Lottery: she plays for the first time and wins a huge jackpot