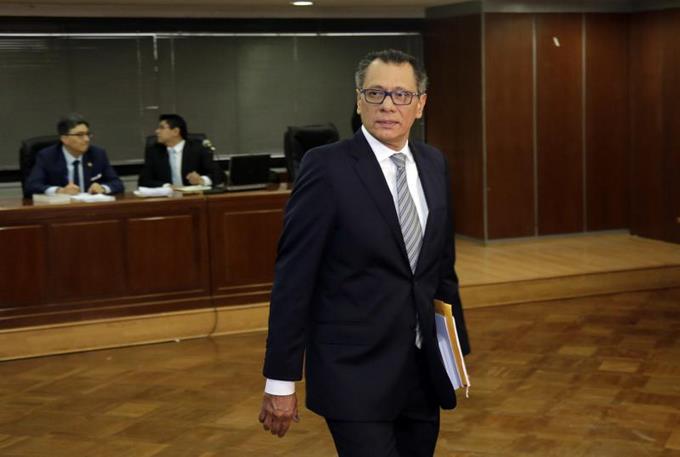 Former Ecuadorian Vice President Jorge Glas, convicted in two corruption cases, was released Monday afternoon on provisional release by order of a local judge. The former high official of the Government of Rafael Correa regained his freedom in April, also by the decision of another local judge, which was later reversed by a higher court.

Jorge Glas is serving two sentences for corruption cases during his time as vice president, between 2013 and 2017, one of six years for illicit association related to the Odebrecht case in Ecuador and another of eight years for a bribery scheme in exchange for public works, in which former President Rafael Correa was also sentenced. Glas has been in prison since 2017.

Judge Emerson Curipallo, from the Santo Domingo de los Tsáchilas penal unit, some 150 kilometers southwest of Quito, granted a precautionary measure requested by the former vice president’s defense team. His pronouncement warns that it will be in force until a judge of prison guarantees determines otherwise.

It granted him substitute measures such as the weekly presentation in the Litoral penitentiary and the prohibition to leave the country.

Glas’s defense attorney, Edison Loaiza, told the press that “this is due to the failure to comply with the prison benefits that have been repeatedly requested.” He argues that the former vice president has completed more than 60%, so he can benefit from pre-release. They have also requested the accumulation of sentences, without obtaining an affirmative resolution so far.

In April of this year, Glas was also released thanks to a judicial appeal granted in the first instance by another local judge, whose decision was later reversed by a higher court that ordered his return to prison.

His defense had alleged damage to his health and alleged threats against his life in the Latacunga prison, where he was being held. He was free for a month, before turning himself in to the police at his home in Guayaquil after the revocation of the initial release order and the new arrest warrant.

Glas served as vice president between 2013 and 2017 together with Rafael Correa and was elected to the same position together with Lenin Moreno, in the 2017 presidential elections. Months later he was sentenced to prison.

Faced with the new release order, the Comprehensive Care Service for Adults Deprived of Liberty (SNAI) stated in a statement that as the “executing body of judicial provisions” it complies with the judge’s resolution, “notwithstanding that the SNAI – in coordination with the State Attorney General’s Office – present the revocation of the order that accepts the precautionary measure” as he already did when he was released for the first time seven months ago.

The text ensures that “there is no threat or violation that violates the rights” of the former second president.

Glas is expected to travel to Guayaquil, where he has his domicile, from where he will comply with the alternative measures ordered by the judge. A third sentence for another case is pending in court.