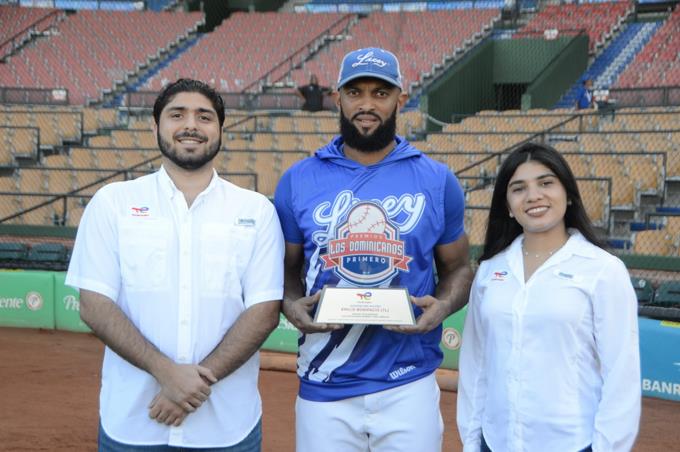 A complete performance in hitting, speed and defense earned Emilio Bonifacio the Round Robin Most Valuable Player award at the Los Dominicanos Primero Cuqui Córdova Awards, sponsored by TotalEnergies.

12 out of 13 voters of the Original Jury supported the captain and outfielder of the Tigres del Licey. Jeimer Candelario, from the Eastern Stars, received the other vote. The 52nd edition of the awards was dedicated to David Ortiz, Cooperstown immortal.

Bonifacio added five stolen bases to his dossier, along with outstanding defense, helping the Blues advance to the final against the Estrellas Orientales.

He received his trophy from the hands of María Calderón and Gabriel Villanueva, executives of TotalEnergies.

The event has been assumed by the subsidiary of TotalEnergies in the Dominican Republic with the aim of highlighting the exploits of the criollo players of our baseball.

The award ceremony has been held for 52 years and was founded in 1970 by veteran sports writer Emilio Nicolás -Cuqui- Córdova, who died in March 2019, who until three seasons ago remained the main organizer of the event.

Córdova instituted these awards under the title “Los Dominicanos Primero,” with the purpose of recognizing the most outstanding native players during the Dominican professional baseball tournament.