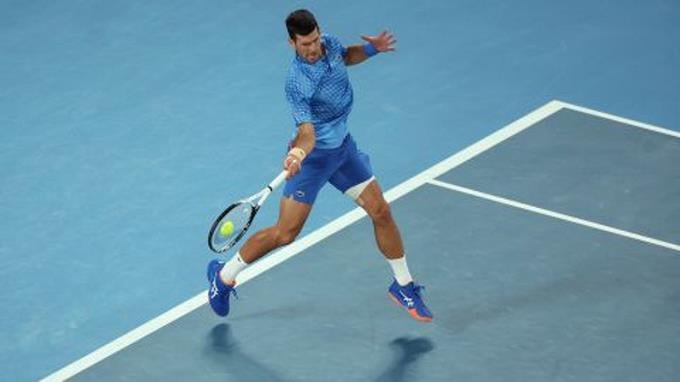 Even limited by a leg injury, Serbian Novak Djokovic advanced to the round of 16 of the Australian Open on Saturday after defeating a vague Grigor Dimitrov 7-6 (9/7), 6-3, 6- in three sets. Four.

The errors of his Balkan friend and securing his shots were enough for the number five in the world to take the match in which he needed medical attention on several occasions and gave up several runs to avoid further damage.

Talented but irregular, the Bulgarian Dimitrov (No. 28) had only won one of the ten matches played against Djokovic, but he was the biggest rival a Serb faced in Melbourne at half speed due to his injury.

Aware of his limitations, Djokovic jumped into Melbourne Park’s Rod Laver Arena willing to quickly solve the task: he broke Dimitrov’s serve in the first game and held the lead for most of the set.

But at the decisive moment, with the score at 5-3, he was unable to take advantage of three set points and in the following game he gave up serve to Dimitrov, who had begun to better calibrate his forehand and his one-handed backhand.

After saving three set points down, Djokovic finally prevailed in the tie-break, killing an 18-shot rally with a volley from the net.

With clear physical discomfort after 77 minutes of play, he celebrated that partial victory by lying on the ground, exhausted, before going to the bench and receiving a leg massage from the physiotherapist.

"The turning point for both of them was the first game. Breaking early was important to me. I didn’t know how I was going to feel physically, I was going up and down"he explained.

Djokovic did not give a choice in the second set, in which it was enough for him to avoid mistakes and break the sixth game.

The match seemed settled until the Serb’s physical discomfort reappeared in the middle of the third set, who stretched his leg between serve and serve and once again required medical attention on the bench.

Even so, the two breaks in the advantage obtained gave him the margin to secure the pass to the second round.

"It was an incredible battle, 3 sets in 3 hours. Now to rest and prepare the next"said Djokovic, who will face Australian Alex de Minaur (N. 24), of Uruguayan father and Spanish mother.

The Spanish Roberto Bautista Agut, number 25 in the world, eliminated Scottish veteran Andy Murray, great protagonist of the Australian Open, in the third round this Saturday after two agonizing victories to five sets.

Having played half the hours in the tournament than his rival, with ten and a half hours in his legs, the Spanish tennis player imposed his physical freshness to beat the former number one in the world 6-1, 6-7 (7/9), 6-3, 6-4.

After a marathon second-round game, which ended at 04:05, Murray struggled to get into the game against Bautista, who scored a 14-point run with just 1 start.

With two service breaks, the 34-year-old Spaniard claimed the first set in just 28 minutes and put the ground back in the middle with a quick break in the second set.

However, Murray’s slow combustion engine began to carburete and make the public dream, clearly in his favor, with a new five-set battle.

With still visible injuries to his arm and leg from the first round, the Scot donned survivor gear and broke back to Bautista and saved two set points in the tie-break to win the set.

But the three-time Grand Slam winner’s gasoline ran out and, although willful, he ended up ceding serve at the decisive moment in the third set, giving Bautista the chance to serve at 5-3 in favour.

Stoic, the Spaniard made no mistake and making Murray run from one side of the track to the other closed the set.

History repeated itself in the final set, in which Bautista got a break in the penultimate game and put an end to the Scotsman’s feat in Melbourne.

"Always playing against Andy in a Grand Slam is very hard. He knows the game, he knows very well how to play a Grand Slam match, but I am very happy with how I have managed the pressure and the nerves"said the Spaniard, somewhat annoyed with the public.

"There was a lot of love for Andy today. I hope that in the next round there will be a little more for me."he added.

Bautista, the only remaining Spaniard, will fight American Tommy Paul on Monday for a place in the quarterfinals, which would equal his best result in Australia in 2019.

Then, the man from Castellón also beat Andy Murray with numerous physical problems in the first round.

Test for young Rune
In a box increasingly empty of favorites after the eliminations of Rafael Nadal, Casper Ruud or Daniil Medvedev, the main seeds fulfilled their role and sealed their passes to the round of 16 without complications.

At 19 years old, the Danish Holger Rune (N. 10), who surprised Djokovic in the last Masters 1000 in Paris, continued without giving up a set in the tournament and got rid of the Frenchman Ugo Humbert in just over two hours.

In the round of 16 he has a high-profile duel against the Russian Andrey Rublev (N. 6), also very solid in Melbourne and whom he already won on the way to his title in Paris.

The main hope of the local fans, Alex de Miñaur (N. 24), of a Uruguayan father and a Spanish mother, who will be Djokovic’s next rival, also passed the round.

"I will probably have the best in the world in front of me and I am ready for battle. I want to face him and show him what I’m made of"he added.

In the women’s draw, the Belarusian Aryna Sabalenka (No. 5) confirmed her good form against the Belgian Elise Mertens, with no sets against in 2023, and advanced to the round of 16 in Australia for the third consecutive year.

Against Olympic champion Belinda Bencic (N. 12), she will try to break her ceiling in Melbourne and reach the quarterfinals for the first time.

More problems faced the French Caroline Garcia (N. 4) against a rival a priori much inferior, the German Laura Siegemund (N. 158), who took the first set widely before giving in to the champion of the WTA Finals tournament (1- 6, 6-3, 6-3).

The former Czech world number one, Karolina Pliskova (N. 30), also overcame her commitment against the Russian Varvara Gracheva and will face the Chinese Zhang Shuai in the round of 16.