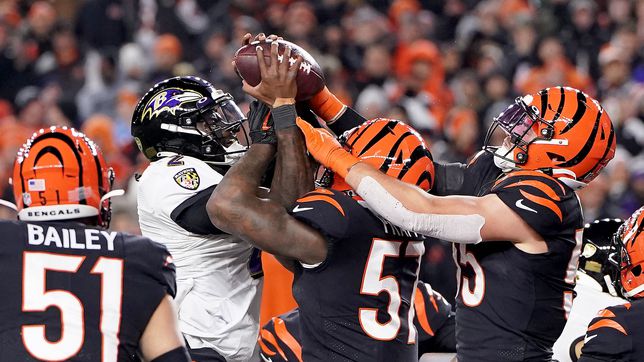 A great attack is not enough to go far in the NFL. Teams aspiring to fight for the Super Bowl need a defense that can come to the rescue when necessary, and that’s what happened to the Cincinnati Bengals last night. When the Ohio franchise was being suffocated by some intrepid Baltimore Ravens, the defense of the locals appeared to solve a game that was getting more dangerous than expected. A historic touchdown defensive end Sam Hubbard ended up giving the Bengals a 24-17 victory in the Wild Card and served as a reminder that defenses also win games and championships.

As in the vast majority of Wild Card duels this weekend, the confrontation between the Bengals and Ravens was presented with a clear favorite, the locals, although this theoretical superiority was not reflected on the pitch either. The same thing happened to ring candidates like the Bills, who will precisely be the rivals of Cincinnati next Sunday in the Divisional round, in a clear demonstration that nothing is easy in the NFL playoffs. Cincinnati and Baltimore had met just seven days ago with the AFC North title at stake and the win went to the Bengals quite clearly. But everything changed a week later, and the Ravens made a team that appears in many pools sweat a lot to reach the Super Bowl.

Without the presence of their great star, quarterback Lamar Jackson, due to a mysterious injury that occurred several weeks ago, Baltimore’s managed to get the game right to the place they wanted: the mud and the trenches. The team led by John Harbaugh contained the powerful attack of the Bengals, and from the first moment put a lot of pressure on a Joe Burrow who was not as comfortable as usual. The Cincinnati quarterback drew two sack calls in the opening minutes, though with great possession he found his faithful partner Ja’Marr Chase for the first touchdown of the night. The Ravens, satisfied with the muddy game, did damage on the ground and through the air. Jackson’s backup, Tyler Huntley, wasn’t intimidated after throwing an interception on his second pass of the game. and got his team to leave ahead at halftime with a surprising 9-10 score.

After a touchdown exchange around the locker room, the atmosphere in the Paycor was rarefied. The Bengals, who entrusted the full weight of their attack to Burrow’s genius, began to see themselves on the ropes and without the way to get their hands on some solid Ravens. In the absence of an individual star, those from Baltimore displayed a choral game that was more than effective. Already in the last quarter, Huntley perfectly directed a drive that came dangerously close to the end zone. Play after play, the Ravens drove and moved the chains until they were just one yard from a touchdown that would have given them a seven-point lead with 10 minutes to go. Taking no chances, Harbaugh’s decision was for Huntley himself to advance that one yard to the endzone protected by his offensive line. But the Cincinnati defense appeared, that great forgotten when it comes to talking about some Bengals in which the striking thing is the explosiveness of their attack.

In a play reminiscent of an NBA block, two Bengals defenders jumped to prevent Huntley from driving the ball into the end zone. The Ravens quarterback erred to expose the ball so much, and Cincinnati took advantage of it to snatch it out of his hands. Fortune made the ball fall on a Sam Hubbard who rushed to run to the other side. No one could hunt him down, and the Bengals defenseman scored a 98-yard touchdown run that is already the longest-distance fumble touchdown in playoff history. The defense of the Ohioans gave the check, and was also in charge of dealing the checkmate. They returned to stop the desperate attempts of some Ravens who caressed the touchdown on the last play of the game. Last year’s finalists survived a cheat game, and despite Joe Burrow finishing with just one touchdown pass (plus another run), his plan for revenge is still on. The next stop will be some Buffalo Bills that did not give the best impression this Sunday eitherbut Cincinnati enters the Divisional round knowing it has a defense that comes to the rescue.