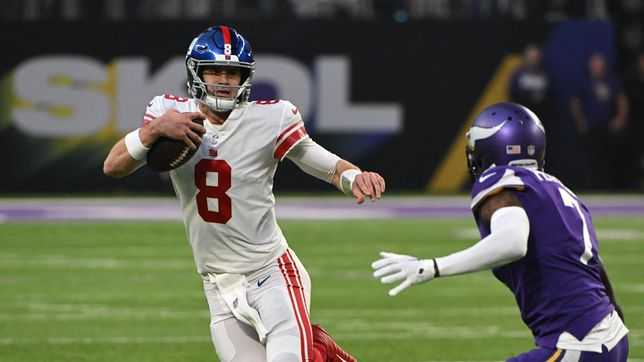 Whoever plays with fire may end up burning. This same thing has happened to Minnesota Vikings, who were eliminated last morning after losing in WildCard against the New York Giants 24-31. After spending the entire season walking on a wire, the Vikings fell into the void at the moment of truth and the Giants achieved their first playoff win since 2011, when they lifted the Super Bowl. The great name of the meeting was that of Daniel Jones, quarterback of the New Yorkers, who vindicated himself on a big stage to silence all the doubts that have arisen around him in recent years.

Minnesota reached the playoffs being the third seed in the NFC and with a record of 13-4. The theory says that the Vikings should be a feared team in the postseason, but the reality is that their year had left many gaps. In the three defeats, those from Minneapolis left a very bad image (they lost 3-40 against Dallas and 41-17 against Green Bay), and not even the wins were convincing. Of the 13 games won by the Vikings, 11 of them were decided by a touchdown difference or less. Of course, they showed 100% effectiveness in those games decided by a score. Minnesota has been playing with fire all season, and they had done well until yesterday, when they ended up getting burned at the worst possible time when they lost a game decided by seven points or less for the first time.

The first half was an offensive feast, especially from a Giants who scored on their first three possessions with a great balance between powerful runs from Saquon Barkley and successful passing from Daniel Jones. Those of New York are another team this season, and the main culprit for this is Brian Daboll. In 2022, the coach took the reins of a franchise that had been in the desert for too many years: since the departure of the legendary Tom Coughlin (with whom they won two rings) in 2016, five coaches have passed through the Big Apple in six seasons. The last campaign, with Joe Judge at the controls, was a complete disaster and, after finishing with a 4-13 record, the general manager, Dave Gettleman, was also fired to entrust the position to a Joe Schoen who gave Daboll equipment keys. And these changes took effect. With a roster much the same as a year ago, the Giants have been a completely radical team. And the Canadian coach is the main culprit.

The brilliant start of those from New York was a good example of the signs of the team created by Daboll. Courage on offense, importance of the running game and confidence in the quarterback to make decisions, aggressive defense that leaves no time to think about the opponent… The Vikings kept up the pace thanks to an omnipresent TJ Hockenson, who emerged as the leader of the stroke. His defense, like the whole year, suffered and made disciplinary errors. After the 14-17 break, the visitors continued to set a very high pace in attack. And it was here that Daniel Jones became the owner of the party. The New York quarterback, chosen sixth in the 2019 Draft, has always been questioned since his arrival in the league. With a trajectory of lights and shadows, Jones debuted in a playoffs with the intention of showing that he has what it takes to command a winning franchise. And boy did he do it. She dominated the game at her leisure and handcuffed a Minnesota defense that she wowed with 78 yards rushing and 301 passing.

In the biggest game of his career, Jones slammed down the table. He exuded bravery and chaste, not shying away from contact with the opposing defense and fighting for every yard as if his life depended on it. The Giants, mired in much doubt about his future with Jones, decided not to extend his contract to a fifth year. Perhaps after this Wild Card game, in which they ended up winning thanks to a Barkley touchdown in the fourth quarter after a sensational drive by Jones, they regret that decision and may have to check out to keep the quarterback. The Vikings had one last chance to even the game, but they blew it on a fourth down gamble on an inexplicable 3-yard pass. From so much playing with fire they ended up burned. The Giants, in which illusion reigns, advance to a Divisional round in which they will travel to Philadelphia to take on the NFC’s top-seeded Eagles. They have already met twice this season, both with victory for those from Philly. But now the Giants arrive launched and with Daniel Jones at full capacity. The Big Apple has a new idol.

Minister Almonte delivers to the Chamber of Accounts, the Comptroller’s Office and Marranzini the technical-forensic audit of Punta Catalina