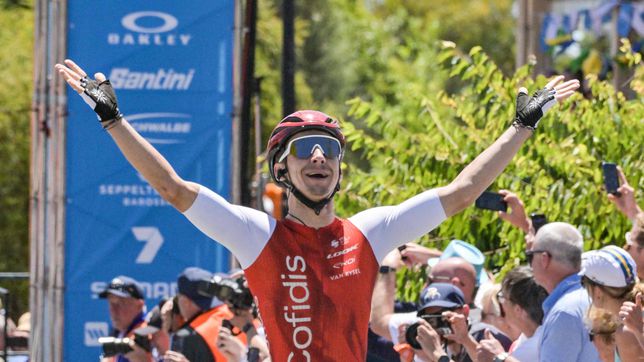 Victories in Langkawi, Dunkirk, Valencia or Oman. Up to 48 wins, but none in the World Tour category after a decade as a professional. This Saturday, Bryan Coquard (Cofidis) raised his arms incredulously after winning the penultimate stage of the Tour Down Under. Hands to the face and explosion of joy, with clenched fists and moving the arms with energy. At the 49th, the charm. “It has been a long time, I have waited 10 years for this victory, the first on the World Tour. I am very proud and very happy. I have won many races, but never one like this. That was the goal for 2023, so achieving it already in January is good news ”, he assessed after the race. With an early start, he surprised the favorites on the main street of Willunga, 47 kilometers from Adelaide. Behind him, unable to react to the powerful sprint, Alberto Bettiol (EF) and Hugo Page (Intermarché). With the same time, the leader Jay Vine, protected by the UAE in another day of falls and with 15 seconds of margin on the Spanish Pello Bilbao (Bahrain)second overall, before the final stage. Everything is possible.

“Today was a very stressful day. We have an amazing group. We put six riders in front helping me and there were clear instructions from the team car. I have not been counting chickens before they hatch and we have passed the day, now we have the strongest team for the end of tomorrow ”, Vine analyzed after the stage, with the idea of ​​becoming the ninth local rider to win at the Australian round. Tomorrow, shielded by the powerful UAE, where he wants to continue exploiting the potential shown last season, Jay will have to defend himself on a 112.5km circuit with five climbs up Mount Lofty, 1.5km at 6.8%. In addition to Pello, Simon Yates (Jayco) will also try to steal the final joy from him, with the same time as the Basque runner. “I look forward to Lofty,” the current leader of the general dropped.

In Willunga, the wind, very violent, was almost alien to the Australian. Impeccable strategy of the UAE during the 133.2 kilometer stage, once again bumpy and reserved for sprinters. Tension and control marked the first kilometers of the day, through the McLaren vineyards. Jonas Rutsch (EF) and Daryl Impey (Israel), based on insistence, managed to form the breakaway of the day at km. 30, facing changing gusts, which hit from different directions depending on the point of the route, which took the form of a circuit. With 77 km to go, the Jayco broke the main group and, while the fans became inevitable, nothing could be done to avoid the crashes, present in practically all stages. At 60 km, the adventure of Rutsch and Impey ended, punished by the pace imposed between the teams of sprinters. Everyone complied with the manual, but none of the favorites (Michael Matthews, Caleb Ewan…) finished off. From afar, without anyone expecting it, Coquard emerged, ten years later.

Stage 4 Tour Down Under

General Tour Down Under