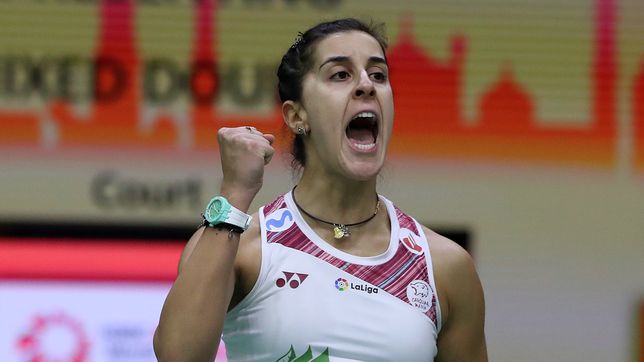 Carolina Marín has achieved a victory this Tuesday that can help her in future matches. The player from Huelva defeated the Japanese Nozomi Okuhara in her debut at the Indian Open, a player who, like Marín, continues to fight to return to the elite, 21-13 and 21-18 after 39 minutes. With this victory Carolina Marín manages to break the tie at eight that she had with Okuhara in their direct confrontations (now favorable 9-8 for the Spanish).

At the beginning of the first round, both ‘Caro’ and Okuhara alternated at the front of the scoreboard until the Huelva player achieved a 5-0 run that allowed her to gain distance (9-5). A Carolina Marín who, with another 4-0 run, increased her sale to 6 points (13-7) and who continued adding against a Okuhara who could do little against Huelva. With 19-13 in favor, Marín added the two points that were missing to close the first set 21-13.

In the second round, Carolina Marín took the lead in the first points to reach 6-4 in favor, although a 0-4 run allowed Okuhara to turn the score around (6-8). The Japanese had an advantage of up to four points (12-8) before Marín achieved a 5-0 run that put her ahead (16-14). Okuhara reacted to reach 16-18 but then Carolina Marín chained five consecutive points to close the set and the match 21-18.

In the round of 16, Marín will have an even more complicated commitment, since the Huelva native will face off against the Thai Ratchanok Intanon, fifth in the world ranking and sixth seed in the tournament, who beat Malaysian Jin Wei Goh by 21- 13 and 21-11. Intanon is another of Marín’s ‘black beasts’, since in the eleven occasions in which they have faced each other the Thai has prevailed seven times to four of the Spanish. A trend that Marín will try to reverse in search of the quarterfinals in India.

Ray Dalio: “Bitcoin is not the answer”