In our Discord community for members, brands received (check our community here† So we thought it would be a good idea to put this project in the spotlight and dedicate a premium series of articles to it. In this series, we dive into the fundamentals behind crypto projects and will come back periodically to monitor developments. As you are used to from us, we analyze various statistics to paint a clear and realistic picture. If you still have questions after reading this article, you can easily ask them in our Discord community for members.

Bitcoin (BTC) has recently fallen sharply in price. From a peak of $69,000 to a current price of around $20,000. The cause is the macroeconomic uncertainty that has brought down the entire capital market in addition to the crypto market. Despite the low price of Bitcoin, we see a much more positive story in terms of on-chain fundamentals. In this section, we periodically look back at Bitcoin’s fundamentals against the price to see if the price action is fundamentally justified.

In this section, we look at key fundamental metrics. Fundamentals focus on underlying technology, development and number of users of a blockchain network to give an idea of ​​the long-term potential of a project. This forms the basis for estimating risks and making investment choices.

The Bitcoin hash rate is a good indicator of network security. The hash rate is the computing power of the Bitcoin network and is expressed in the number of calculations per second. Miners provide this computing power and perform the checks on the transactions in exchange for some Bitcoin. The more controls and the more decentralized this takes place, the better it is for the network. In addition, the high hash rate indicates that many people are willing to invest time and money in mining Bitcoin and thus have a positive long-term belief.

In figure 1 you can see the hashrate (yellow line) compared to the price of Bitcoin. At the moment the Bitcoin hashrate is at an all-time high, indicating that the mining demand for the network and its security is at an all-time high. However, it is striking that the price is falling. In general, the hash rate increases when the bitcoin price rises because mining becomes more lucrative. When the price falls, you would normally also expect a decrease in the hash rate (see crash around April 2021). The fact that this has not happened shows that the mining community is positive about the future of bitcoin.

The number of unique addresses that own more than 0 Bitcoin (or Satoshi’s) indicates the adoption of the network. Despite the price crash of recent months, we see that the number of unique (non-zero) Bitcoin addresses has reached an all-time high in recent weeks. This shows that adoption continues to grow, despite volatile price developments. More and more people decide to get in during the dip. 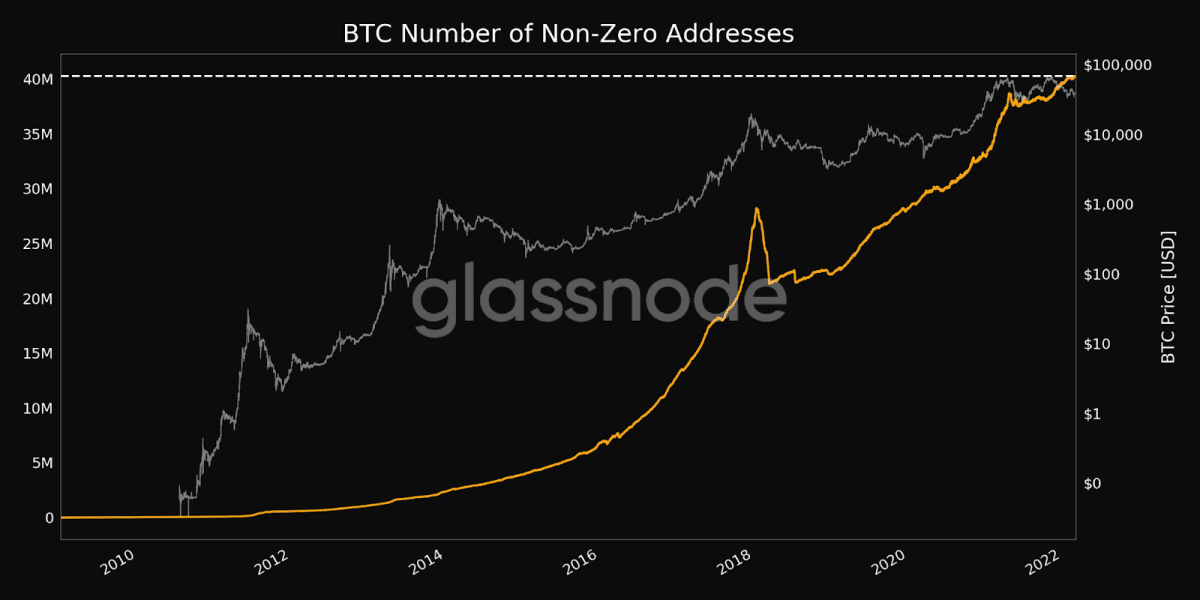 The behavior of Bitcoin whales (or wallets with large amounts of Bitcoin) gives a picture of what the big money (often institutional money) is doing. Because whales have so much Bitcoin, they can have a relatively strong influence on the price. It is striking that from Figures 3 and 4 it can be seen that the number of wallets is decreasing by more than 1000 BTC (from about 2250 to 2200), this shows that the huge price crash of recent months has had a limited impact on the large whales. If we look at the price crash of May 2022, we saw a very strong retraction of some major BTC wallets. This shows that the price decrease has been influenced by, among other things, whale wallets that sold large volumes of their Bitcoin. 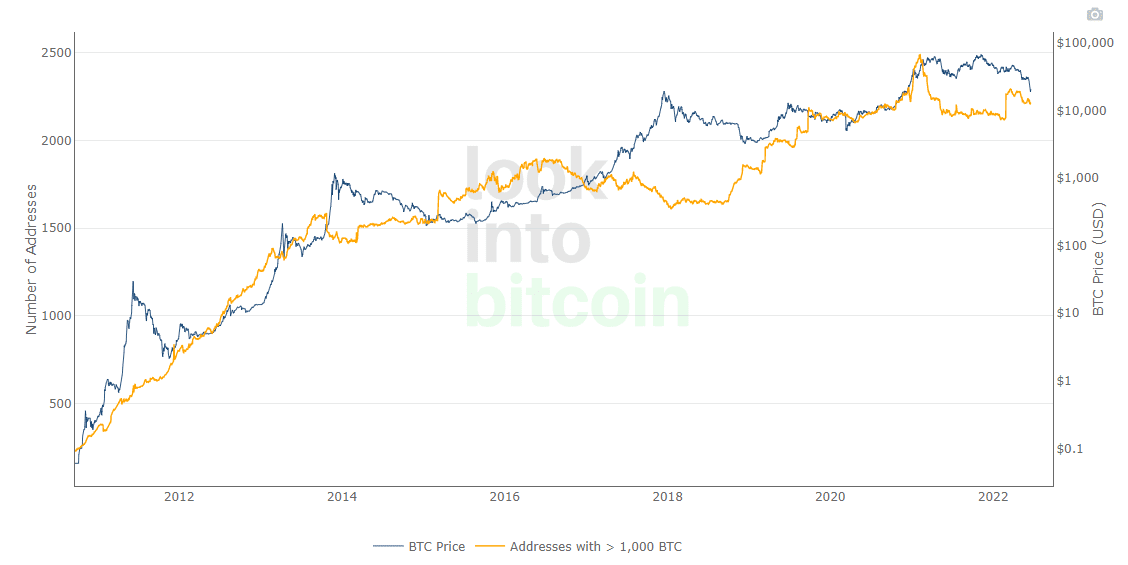 In Figure 4 we see the number of wallets that own more than 1 Bitcoin. It is striking that a lot of people use the dip and buy additional BTC to own a full Bitcoin. At the moment we have a record number of wallets holding 1 Bitcoin (above 850 000). This indicates that many investors are accumulating. 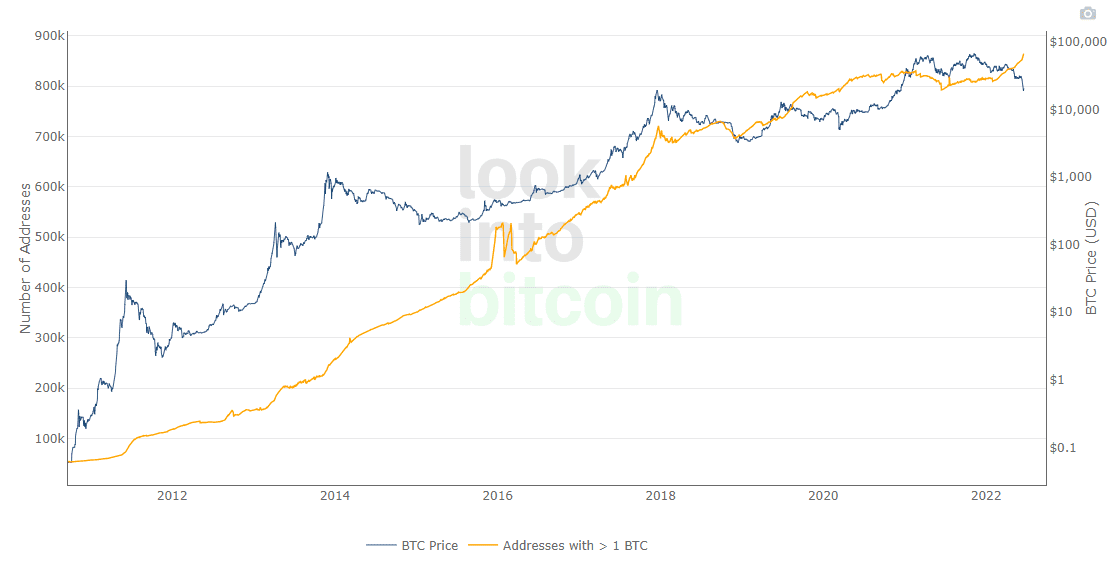 Crypto exchanges are mainly used for trading. A lot of Bitcoin on an exchange often means that a large part of the market is uncertain and wants access to sell their Bitcoin quickly. When many Bitcoins are on cold-wallets (and are therefore more difficult to trade), this gives a picture of the long-term conviction of holders. In Figure 5 we see the net Bitcoin on exchanges. As they see, the amount of Bitcoin on exchanges has fallen very fast. This shows that during the price crash last month, Bitcoin was continuously bought and withdrawn from exchanges to, for example, cold wallets. This shows that there is continuous investment in Bitcoin, despite the price crash. In addition, it is an indication that more Bitcoin is in the hands of long-term investors.

Bitcoin miners have an essential influence on the Bitcoin price. Because miners incur a lot of costs related to the purchase of mining rigs and electricity costs, miners have to constantly sell (a part) of their mined Bitcoin. When miners hold a Bitcoin, this usually indicates that they have a longer-term belief that the price will rise. Figure 6 shows the net change in Bitcoin holdings of the miners. The chart is averaged over 30 days to better reflect the trend. It is clear that part of the price capitulation in recent months is related to the strong selling of miners. On the positive side, the trend seems to be reversing and more and more Bitcoin is being sold. 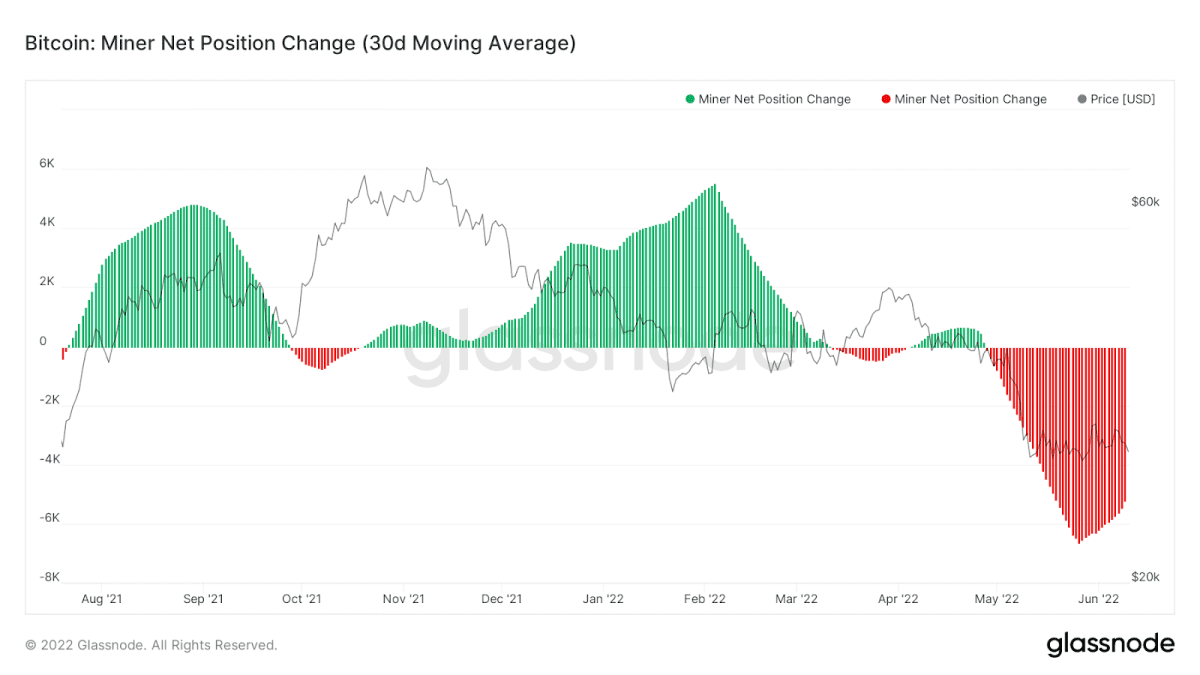 It is striking that despite the strong crash of the Bitcoin price (and the overall capital market), many on-chain fundamentals are even at an all-time high. For example, the hashrate is higher than ever and the number of unique addresses has only increased. This shows that in the long run there is still a lot of faith in the Bitcoin network.

To answer the question whether this is the right time to buy or sell, we would like to refer you to our Discord group for members. There, our analysts and experienced traders discuss their own entry and exit points on a daily basis. We also regularly share additional course analyzes and updates of projects that we have discussed earlier in this section. Through Discord we can share knowledge with each other 24/7 and we try to stay ahead of the market together with our members.

Investing involves risks. Our analysts are not financial advisors. Always consult an advisor when making financial decisions. The information and tips provided on this website are based on our analysts’ own insights and experiences and are for educational purposes only.

At 70,000 euros per m2, this is the most expensive apartment in Barcelona

Investment fund CEO quits "go to the beach and do nothing"

The French defense industry is ready to increase its production, according to Lecornu

Thanks to a computer bug, they fill up with gas for a very reduced price