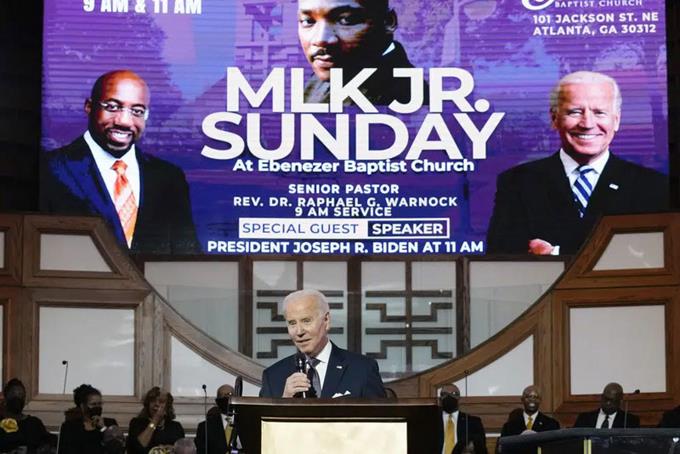 The US president, Joe Biden, participated yesterday in a mass in memory of Martin Luther King and offered a speech in which he spoke of the “critical moment” that the United States and the world are experiencing, and of the need to continue fighting for the democracy.

Although he did not refer to the crisis he is experiencing due to the discovery of numerous classified documents in his home and office, the president spoke of darkness and redemption: “I need not say that we are not always at our best. We are fallible, we fail and lose faith, but history teaches us that no matter how dark the night, joy comes in the morning,” he said.

On the day the civil rights defender would have turned 94, Biden became the first serving US president to speak at a Sunday mass at the Ebenezer Baptist Church, located in Atlanta, Georgia, where Luther King Jr. (1929-1968) served as a pastor from 1960 until his assassination in 1968 and at which his funeral was held.

“I have spoken before Parliament, kings and queens, leaders from all over the world, but this is intimidating,” Biden said in the pulpit, surrounded by a gospel choir that sang several songs at the mass celebrated by Ebenezer’s pastor, the US Democratic Senator Raphael Warnock.

With numerous biblical allusions, Biden – a practicing Catholic – offered a speech in which he spoke of the “turning point” that the United States and the world are experiencing: “What happens in the next six or eight years will determine what the world will be like for years to come.” the next 30 (…) The world is changing and there is a lot at stake”, he stated. It is, therefore, a moment to “make Dr. King’s vision tangible”, “to choose democracy over autocracy” since “nothing is guaranteed”.

“It is a constant struggle between hope and justice, kindness and cruelty, against racism, extremism, insurrection,” he added.

With this public act, Biden closed a complicated week in which the White House has had to confirm, on three occasions, the discovery of classified papers that the US president kept irregularly at his home and in his office when he was vice president (2009-2017). of Barack Obama. This case could complicate the last two years of his term before the next presidential elections in 2024, in which he has not yet confirmed whether he will run.

Biting between Union Berlin and Leipzig over the signing of Isco