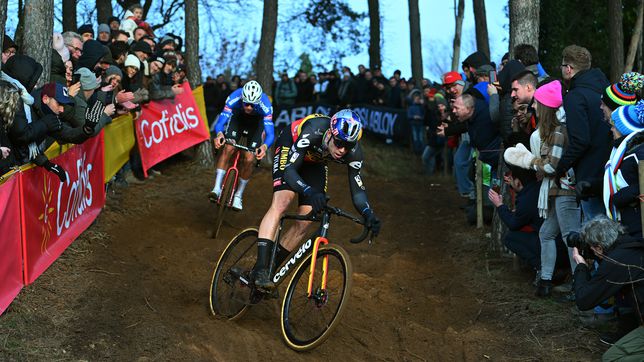 In the middle of January, Benidorm is one of the great points of tourism in Spain. Good temperatures during the day, sun present (although with wind in the last days) and a large number of foreign visitors, especially from Great Britain, Belgium and the Netherlands. In the town of Alicante, the Benidorm Fest will take place shortly (from January 31), a contest between different singers to then choose the song that represents Spain in Eurovision. However, the stars are already present there, specifically those of cyclocross. After 11 years of absence (Igorre, December 2011), Spain hosts a World Cup of this cycling discipline (14:15, TDP and Eurosport). And it does so on the Costa Blanca.

This is the penultimate test of the season before that the road map comes to an end in France next week and the World Cup in the Netherlands (February 5) closes the campaign. In this way, it will be the last time this winter campaign that the three cyclocross stars (Van Aert, Van der Poel and Pidcock) face each other before taking the leap to the road (see graph). Belgian and Dutch will be in the World Cup, but Pidcock, defending champion, Put an end to wearing the rainbow today to start thinking about the classics with the Ineos. The poster is unbeatable, because in addition to the three of them (and the triple world champion, the veteran Zdenek Stybar), there will be Laurens Sweeck and Michael Vanthourenhout, who are playing for the overall World Cup (the three aces participate in skipped events only) and in women Fem van Empel and Puck Pieterse will do the same.

In a Spanish key, the recent national champions Felipe Orts, from Burgos BH, and Lucía González will be the great assets. Alicia González, from Movistar, will also be there. All this in a morning session in which about 15,000 people are expected in the bowels of the Foietes and Moralet parks. “The first part is very technical and the second is fast and hard. Hopefully I can fight for the Top-10″, analyzes Orts in AS. Wout van Aert, in his hotel in Mutxamel (half an hour from Benidorm) was with a small group of media late in the afternoon. “I have never raced in Spain and I think it will be special. I see great enthusiasm ”, she highlights “with surprise ”that at 28 years old he has never participated in a Spanish test. The one from the Jumbo also praised Spanish cycling: “Valverde was outstanding, and currently Enric Mas and Pello Bilbao, who won Australia not long ago, are doing very well. Spain is one more country of climbers”, analyzes the man from Herentals.

As a child, a young Wout admired another illustrious Belgian: “Tom Boonen”. With 39 road victories in his record, he has pending accounts “with the Tour of Flanders and Paris-Roubaix” and sees “compatible” continue with his lifestyle: “I do see myself combining cyclocross and road my entire career. Now I train more short efforts (because of cyclocross) and then the long ones”. He will go to the Tour, where he shone in 2022… “Pressure? The rivals will know us better (Jumbo), but we are strong”.