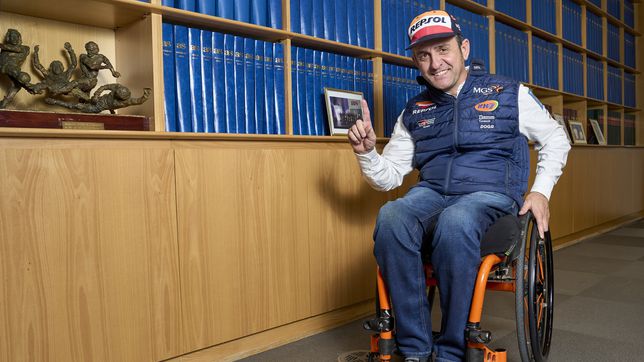 “The Dakar has to be long, hard, difficult and complicated in navigation” and although this last section has been somewhat marred by the rains during this edition, for Isidre Esteve (Lleida, 50 years old) the race has gathered all the ingredients that a “real Dakar” requires. How is he really? The one in which “when a pilot comes home and they ask him how he is, He has to say ‘I’m not going back, it’s been very hard, and too many things have happened’. The winner only has to say that nothing has happened to him, because that is why he is the winner”. The idea of ​​how this race should be in the mind of the ilerdense is quite defined and in his case, the two weeks of competition fulfilled all those answers since, when they aspired to a top-15, a mechanical problem completely changed their plans.

They saved a first week where “The objective was to reach the rest stage without having thrown the race overboard”. They had “four problems that are part of the Dakar”, but in the second when the car “worked very well” and they were in favorable territory within the dunes, a “Electrical relay that gave a signal to the starter motor fused.” The Hilux would not start, a downhill made the mission possible, but despite the fact that Txema, his co-driver, warned Isidre that the car could not be stopped again, eventualities always happen at the most inopportune moments. Two dunes separated by a void were to blame, Villalobos carried out an engineering work who scored disbelievers in Toyota and ended up a stage where they left 3 hours and a half that they could not recover and took them to 34th overall overall.

They were able to escape the dunes during the marathon thanks to a T1+ that also surprised David Castera, race director. The Toyota could with the harshness of the desert but not with the accuracy of a time that means that “in the current Dakar, If you leave yourself time, the positions will go away ”. Something that may seem unfair, “but this works like this”. Esteve assumes how the level of a competition that is decided “by details” has increased and in which, if it were only a question of going fast, Sainz could be the best: “He is a very fast driver, I think we set a stage and he and Loeb are the best.” However, the table has given the winner to a Nasser “who has covered many kilometers of sand, makes a perfect pairing with his co-driver and is very clear that nothing can happen to him to win the Dakar. You won’t see him running more than the others, he’s going to win it by making fewer mistakes”.

The Qatari has also had the best car in an edition where, in the top-5, four Toyotas out of a possible five have placed. “People say that the best car for the Dakar is the one that does not work well on any surface, but it has to go a bit well in all of them”, explains Esteve, about the performance of a prototype that “has met expectations” in the case of the Repsol Rally Team driver. Except for the problem, his position oscillated “between 13th and 21st” and the three hours that he left along the way would have helped him to be 16th. Although in the Dakar The “if it hadn’t happened…” they are useless, much less for a pilot like the ilerdense who pressures himself with the results: “When things don’t go well I get angry, I say this can’t happen anymore.” Nor does he want two aspects that have marked this edition to be repeated.

“The Dakar has made three decisions: He has done longer stages, we have rested less and there are more days of the race” and although Isidre shares these news, he will speak with the organization to seek equality that, in a way, has been lost: “If the cars do not rest for 15 minutes, the categories that are included in that block should work the same for everyone. And the other issue that I want to discuss with David and the organization is orange dorsals reattached. It seems good to me that they continue in the race, but They should go behind.” The ilerdense will try to reconsider those complex aspects before an organization that will guarantee the return to an ‘Empty Quarter’, more complex than it was known this year.

The disappointment of the dunes had a reason: “We found out later. The stages have been short because the desert had no roads to get people out. On the first day, 40 vehicles remained inside and it was difficult to get them out because there are no roads to access the track. But this is going to be fixed.” The ‘Empty Quarter’ “is a part of the race that both the drivers and the organization like”, at the same time that it forms part of that essence of the Dakar that makes everyone want to come back. Why “This race is very engaging and we like it, although the reality is that We have to pay the electricity and water bill at the end of the month”, said Esteve with a laugh, to say goodbye to an edition that promises to improve by 2024.