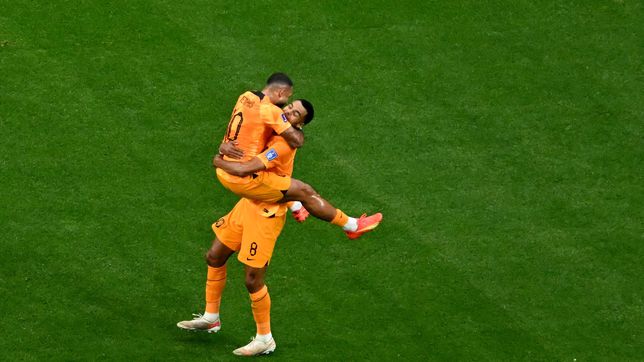 With a foot and a half in the round of 16 and against the worst team in the World Cup, Van Gaal changed the eleven again. Keep looking for a partner for Frenkie de Jong and this time he opted for Marten de Roon, the most defensive option of all available. With him and Klaassen there are more midfielders, but less play in midfield. Neither was great support on the ball for Frenkie in what continues to be this team’s biggest problem.

Something that they did correct was the game by bands and the generation of chances. Van Gaal pointed out that the first thing was something to improve and they saw a more active Blind and Dumfries, although the Inter player is still far from the best level that is remembered. In attack it is true that he shines more arriving than being, so small rivals do not suit him. Qatar, without the nerves shown in the first two games, entered a lot on the left wing. It wasn’t just Dumfries’s fault, that too, but Timber was somewhat lost and unfocused in direct duels. An image that is not surprising considering his discreet matches with Ajax before the World Cup. At least this time they had Memphis as an offensive reference. The Barcelona player likes to offer himself constantly, especially receiving from behind and ordering from there, but also into space. It was not successful, but it makes it easier for the system not to get stuck.

Who scored again was Gakpo. The one who is already one of the stars of the World Cup, drew a wall with Klaassen to relax the tense tie at zero. Frenkie de Jong, getting ahead of two defenders who were going to clear, took advantage of a bad Memphis shot to extend the score to 2-0. Berghuis and Janssen wanted to make more blood, but the VAR saw a control with the hand of Gakpo at the beginning of the play. From there, the Oranje lowered the intensity (except for a shot at Berghuis’s crosshead in discount) as if the sensations with which to reach the knockout phase did not matter. After all, they look at the classification and they see themselves first with seven points.

There were minutes for five substitutes, but none was Xavi Simons. The 19-year-old talent is still waiting for his debut with the Absolute. We all change. They go Gaal too.