We are surrounded by populations of microscopic bacteria. These invisible communities, known as biofilmsare found in habitats ranging from the surface of our skin to sewer pipes, and play a critical role in areas such as medicine and agriculture.

An interdisciplinary team made up of scientists from Pompeu Fabra University (UPF) in Barcelona and the University of California at San Diego developed a new method to control the composition of bacterial biofilms based on the use of electrical discharges.

The team developed a new method to control the composition of bacterial biofilms based on the use of electrical discharges.

The discovery, achieved with newly developed technology, is significant from a medical point of view. Biofilms are very resistant communities that can cause chronic infections, especially in places such as hospitals, where antibiotic resistance It is a major health threat.

Like other multicellular organisms, biofilms are composed of several types of cells that perform specialized functions. For example, one of the types of bacteria that make up biofilms provides the structural “glue” (the extracellular matrix) that holds the bacterial community together, while another type of mobile cell plays a critical role in biofilm establishment and spread.

The balance of these two cell types defines the physical and biological properties of the biofilm and is important for its viability.

Changing the ratio of these two cell types offers a precise method of controlling bacterial communities.

As described in the article published in the journal Cell Systemsa UC San Diego team led by Professor Gurol Suelnext to Jordi Garcia-OjalvoProfessor of Systems Biology at UPF, has developed a new microfluidic device combined with a multi-electrode array, which allows localized electrical discharges to be applied to a growing biofilm. 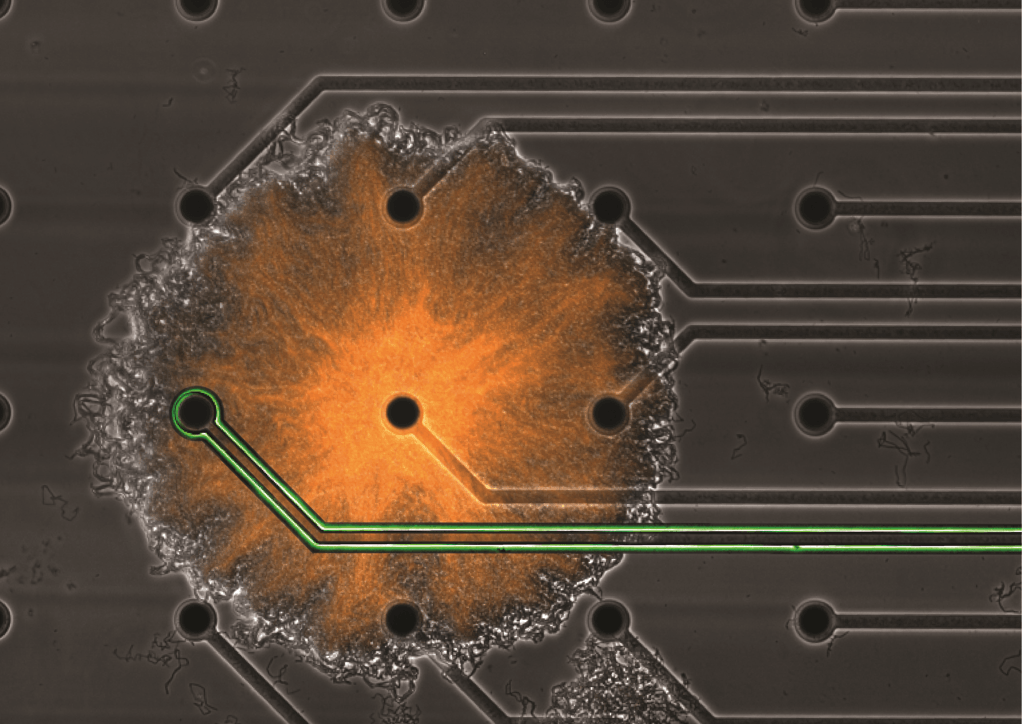 This electrical stimulation causes mobile cells to multiply faster than extracellular matrix-producing bacteria, even though all cells in the biofilm are genetically identical.

“Although it is known that electrical discharges can kill cells, here we show that they can cause the growth of a specific subtype of cells”, explains Süel. “How a one-second-long stimulation can promote growth for hours and just one cell type is a big puzzle that we hope to solve.”

Although electric shocks are known to kill cells, here we show that they can cause a specific subtype of cells to grow.

The role of ions

One of the keys to this effect is the role of ions in cell function. “The regulation of the behavior of bacteria through the control of their ionic composition is still poorly understood”, explains Jordi Garcia-Ojalvo. Being able to modulate cell types in this way is not just important for understanding biofilms.

The electrochemical signals we use are similar to signals used during development in more complex organisms such as frogs, fish or even humans. Therefore, our findings may offer analogies with other biological systems.

“The electrochemical signals we use are similar to signals used during development in more complex organisms like frogs, fish or even humans,” he says. Colin Commerce, first author of the article. “Therefore, our findings may offer analogies with other biological systems.”

Scientists are now studying why electrical stimulation increases the population of one cell type over another. This influence, the researchers say, provides a way to control biofilm composition and development and may offer a new tool to destabilize biofilms and thereby remove their tremendous resistance.