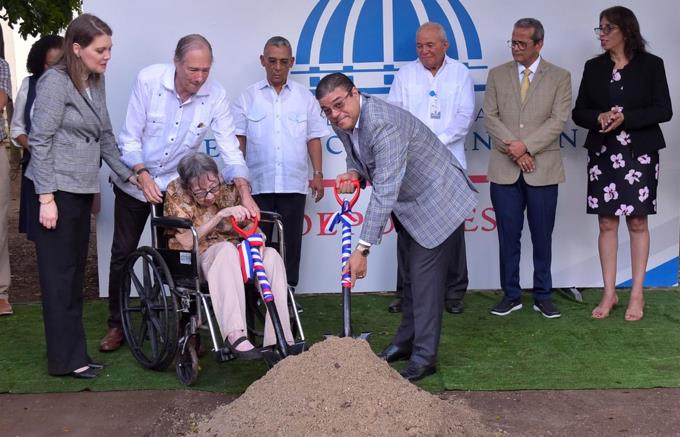 The Minister of Sports Francisco Camacho led this Thursday the act for the raising of a bust at the Juan Pablo Duarte Olympic Center, in honor of the immortal of Dominican sports Enrique Ripley Marín, considered a great sports promoter and one of the heroes in the fight for this space became the most influential national stage for athletic practice.

During the solemn activity, Camacho was accompanied by Mrs. Ada Gómez widow Ripley, along with whom he proceeded to execute the ‘palazo’ that left the work started to erect the bust, which will pay homage to the late founding athlete of the Dominican Boxing Federation , among other entities.

Camacho highlighted the sports, human and leadership qualities that have always graced Ripley Marín, whom he considered one of the heroes in the fight to build the Olympic Center in the capital and later for the celebration in the country of the Xll Central American and Caribbean Games. Sunday 1974.

”This day I have the joy and honor of being here together with the wife of Ripley Marín and other relatives, honoring whom honor deserves with this bust, which should have been in this place many years ago,” added Camacho.

Ripley Marín, an engineer by profession, who died in 2009, was a prominent athlete, promoter of the sport, president of the Dominican Boxing Federation, who was inducted into the Dominican Sports Hall of Fame in 2001.

The ceremony was also attended by the artist Geo Ripley, the couple’s son, who thanked the family for the recognition that the Ministry of Sports gives to his late father.

Also present were the Vice Minister of Sports (school and university) Juan Vila; in addition to Juan Antonio García Smeter, president of the Wiche García Saleta Foundation; Fausto Severino, head of the Miderec Cabinet and the immortal of Dominican sports, Bienvenido Solano.