The world’s largest instant communications platform is now working on one of the most requested options by users of WhatsApp. In fact, here we have the first indications of the possibility of editing a WhatsApp message after it has been sent.

Who has never made a mistake when typing something and pressing send, only to later realize the mistake? Well, it is precisely in a remedy for such cases that Mark Zuckerberg’s platform and, more directly, Will Cathcart’s platform is working.

It will be possible to update a message sent on WhatsApp 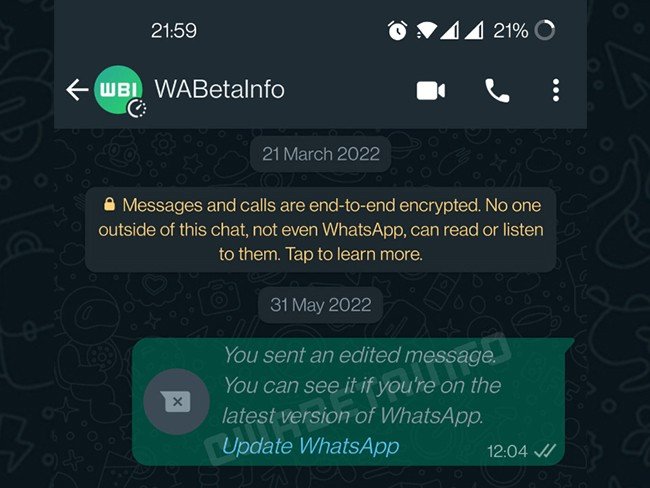 The evidence was first presented by the publication WABetaInfo, always attentive to the purposes of this free messaging app. Specifically, the option was detected in the version of the messaging app to androidthe compilation 2.22.20.12.

Its operation is very succinct. In the same way that we can currently post something to Facebook and then update the content of the post, we think the same mechanic will be available in the messaging app as well.

However, other users will be notified that said message has been updated, in order to avoid possible changes in the content of the original message. It is currently unknown if in private chats the other user will be able to see the update history of the message.

On the other hand, for conversations in WhatsApp groups, the editing history may be available to group administrators. It will be, by all indications, a security measure and greater control of the quality of the group for the respective key members or administrators of the group.

However, it’s important to note that to use it to view an edited message, you must be using the latest version of the messaging app. That is, although they can edit a message in this app, to make sure that the other user receives it and can read it, you will also have to update your app.

Hide Online Status in WhatsApp (If You Can) on iOS

📝 WhatsApp beta for iOS 22.20.0.70: what’s new? WhatsApp is rolling out the ability to hide online status for some lucky beta testers! pic.twitter.com/LGNqnyfND5

Finally, WhatsApp administrators are also making available to selected users the ability to hide their Status or Online Status on the platform. This possibility was detected in beta version 22.20.0.70 for iOS (iPhone).

This is another of the most requested features by users, currently only available for iPhone (iOS) users. However, we believe that it is now a matter of days, or even hours, until the same option reaches the Android universe.

However, if you want to be the first to receive news about this messaging app, you can join the Beta program and try out the new features first-hand.

Harnessing the promise of Bitcoin technology to change lives