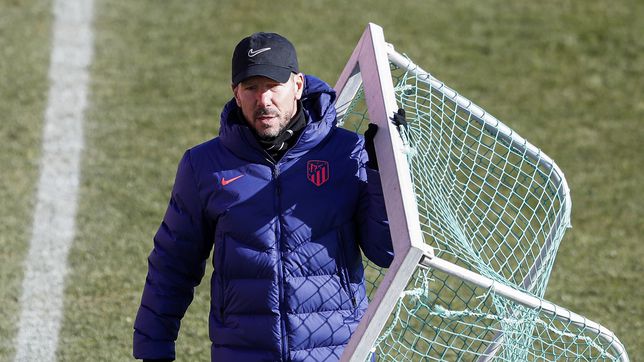 Simeone is already in charge of Atlético. The Argentine coach led the team’s training session in Majadahonda. The return of Cholo was the main novelty of Atlético’s second work session after the return after the World Cup break. Simeone takes command of a team whose most immediate objective is to face the cup clash on December 22 against Arenteiro with the maximum guarantees. Simeone was well above his players in a session in which eight players participated, the same as in the previous training session: Felipe, Reguilón, Reinildo, Hermoso, Lemar, Saúl, Kondogbia and Cunha.

The first part of the training was dedicated to the physical part (with a series of exercises) while later the players already touched the ball. And Cholo insisted on the pressure in the exercises that he put into practice. He divided the players into groups of four and worked on pressing the ball. The coach knows in the next work sessions he will have the same players, plus Savic and Oblak, who will join the 1, and you can’t waste time if you want to get to the top for the cupbearer clash. The players who are playing in the World Cup will gradually join the team. They will have five days off since they are eliminated and Simeone may have another player for the cup match. But the base of the team that faces Arenteiro will be the one that trains these days. It must be remembered that Atlético has twelve players in the World Cup.

With the head in the two friendlies these days

The rojiblanco team will play a friendly match against Ponferradina on the 14th, on the occasion of the Centenary of this club. Before, he planned to face Rayo Vallecano on the 10thalthough the match is not confirmed and could not be played in the end.