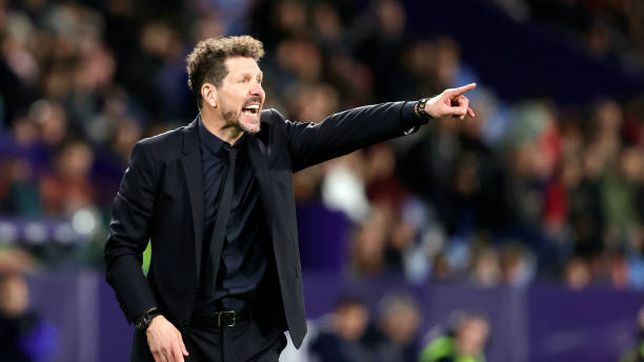 How do you see Marcos Llorente?

As you have seen, there is not much difference. He is growing, going back to the player who was during LaLiga when we came out champions, last season he had to fulfill roles that he can do, but he doesn’t feel so comfortable. When he has that speed, freshness to define, to see, it is decisive for us and we are happy for him and for how he helps the team.

Was there talk at halftime for improvement in the second half?

I think the first half was flat, it wasn’t good, imprecise, we lost balls, rushed, they did a good job of pressing us to avoid finding Griezmann and Barrios, but we didn’t play. there weren’t any scoring chances for any of us, but we didn’t kick on goal and we didn’t show a good face. In the second half, opening Griezmann and we scored, we began to improve, we opened calmly at halftime, the boys are giving their best, we play every three days and we talk about playing ball, because they are boys who play football well. When they associate, they don’t rush, they don’t have the anxiety that blocks you. Correa’s entrance gave us more vertigo, Pablo was not bad, but he understood that the greats had to stay, but Pablo was no worse than the rest. Correa gave what Ángel has, vertigo, verticality, freshness and when he plays this way or like in Almería he is always important to us, he is one of the boys who has played the most. We had no changes on the bench and that’s why we left Correa on the bench and he came out quite well. The team grew, played calmer, we had scoring chances and that’s us. Hopefully we can handle it.

The other day they did not enter and today the first was a goal.

I was telling Morata, you hit the most difficult one, going backwards, without a good angle. To fail you have to be. The players that appear are Correa, Marcos and those who have situations, when that tranquility and conviction appears, it is felt, it serves us and does us good. This victory does us good, we have to be together with all four legs this weekend, the people are important so that they give us strength, energy and we can continue on this upward line.

We do not consider Levante second, even though it is in that category. I had gone 16 games without losing, with a coach who was showing the game that Levante has always shown, with replacements, this field has always cost us a lot, today we suffered in the first half, we did not play as we had to play, in the second time searched, tried. We know the referee, he is not left with a little foul, he passed us or them, he has it as a characteristic, you have to play knowing the referee ahead of you.

Was there fear of losing what you have after 0-1?

There is a rival that plays and when they are losing they try to score, they are encouraged, they are braver, they loosen up more in attack and it is normal for the team that wins to go back. If you can’t go out on the counterattack and take advantage of what the rival is doing, it can happen and if like today you hit a counterattack you can define the game.

You can see a Nahuel Molina growing since the World Cup and understanding Llorente better.

They are doing very well, it is a difficult band for their rivals. Between Rodrigo, Koke, Barrios in the middle and Llorente further up to associate, it’s a band that does damage and we need to be strong. Molina has been playing very often, we have little replacement in that position and what he can give us is going to be demanded of him.

Previously he attended the microphones of TVE

The best is the result?

The best thing was the game change from the first half to the second. Much better after the break. In the first there were inaccuracies, we did not associate, many losses and everything caused us not to have goal situations. A very flat time. In the second, after speaking in the locker room, we came out better.

How do you see the team?

Since we returned from the World Cup the team has been growing. We had a stop in the first 35 minutes, but I’ll take the reaction. We understood that we had to play, to have peace of mind. They didn’t have important goal situations and we have a hard time on this pitch. There are positive things.

How important Correa is to the team.

It is important for the club. We told him. He has always played, he is always among those who play the most minutes. Sometimes as a starter, others as a shock, always for what is needed. Today he came in with what he has, hierarchy, ability, vision of the game, he couldn’t score a fantastic shot. We stay with this Correa, he is the one we need.

Do you understand Calleja’s anger with the referee?

I always understand everything. We are here to accompany the referees. I looked at my team, looking for what we wanted. We knew the referee, we know that he allows the game to continue, he doesn’t whistle any foul.

We can’t open any scenario because we don’t have the confirmation. The club works according to what we need.