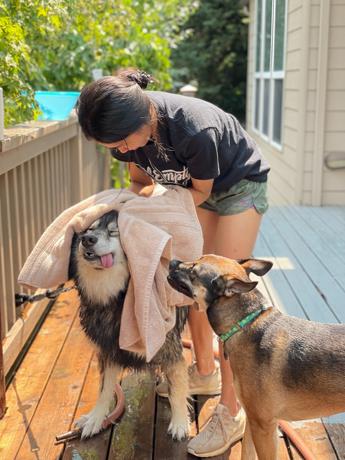 In his hotel located in the suburbs of Beijing, Zhou Tianxiao has a very particular clientele. Their services include belly-scratching and giving toys to dogs that reoccupy rooms after the end of covid restrictions encouraged travel.

Zhou’s Mansion for Dogs is one of many businesses in the pet hotel sector seeing business return to normal with the reopening in China.

"Usually for Chinese New Year, people visit their family and friends, and usually they can’t bring their dogs with them."explains the owner of the establishment, who is also an influencer on social networks.

Originally, this half-million-dollar hotel was aimed solely at comforting his own dog, a border collie named Sylar. Then it became a business.

With its colorful walls, expansive garden, and small rooms watched over by video cameras, the place has become a popular spot for Beijingers who want to leave their beloved pets in good hands and ring in the New Year in peace.

"And we also have a pool"enthused Zhou Tianxiao, for whom the dogs that arrive also live the experience of "going on vacation".

Millions of Chinese are traveling this weekend to reunite with their families for the first time since the start of the covid-19 pandemic in 2019.

Among those who travel, thousands are customers of the Maoxiang pet care platform, an expression that means "the avenue of cats".

This company is recovering. Reservations for the New Year exceed all those received in 2022, founder Yan Dong tells AFP.

"People just didn’t leave their house" when the health situation was serious, he remembers.

Seven Sha, a 30-year-old cat-sitting woman, told AFP that she plans to make 80 home visits during the holidays.

His schedule is packed. "I have to work from early in the morning to late at night."Explain.

Members of the family

In 2022, nearly 100 million households in China had a pet, a number that is rising with the growing development of a middle class.

Many pet owners are dedicated owners of their animals. Sha recalls that a client once sent her a 1,000-word document with instructions on how to care for her pet.

In addition, many animal lovers are willing to spend large sums thinking about the well-being of their pets.

According to a Shanghai media outlet, a night in a center of this type can cost 1,000 yuan, that is, about 147 dollars, which is higher than the average price for a hotel for people.

"Most customers consider cats as members of their family" and they spare no expense, Seven Sha says.

Some prefer to be around their furry friends rather than their own family.

"Personally, I’d rather spend time with the dogs here than go see my family."confesses Mei, an employee of Zhou’s dog hotel.

"Like most families, when you meet for the first time during the holidays you are very happy. But, as time goes by, some disputes may arise."he concludes.

Sanjay Dutt and Arshad Warsi reunite for a new movie