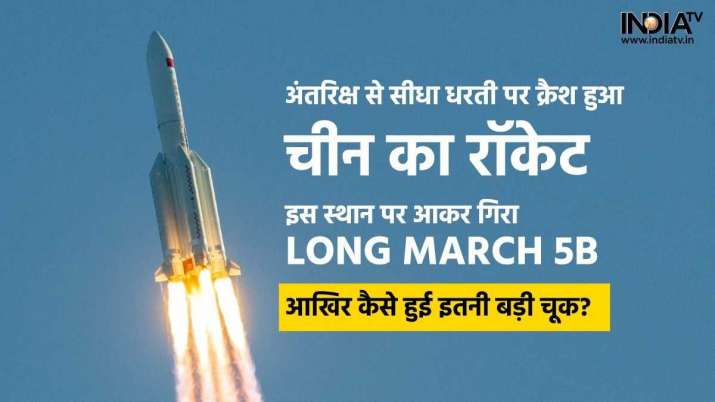 Chinese Rocket: US Space Command officials say that the 21-ton Chinese rocket Long March 5B crashed in the Indian Ocean on Saturday. The US Space Command said on its Twitter handle, “We would like more information on technical aspects such as possible debris dispersion of the Chinese rocket and its impact on the crash site.” US space agency NASA manager Bill Nelson has criticized China for not sharing information. Nelson has said that if information had been given about the rocket from China, then the risky impact of its possible debris would have been known. Especially with heavy-duty vehicles like the Long March 5B, which is a major threat to life and property damage.

China is currently working rapidly on its ambitious space program. Through this, he is building his own Tiangong station on space. The crashed Long March 5B rocket went to the Chinese space station last week to deliver the laboratory module. Social media users from Malaysia shared a video describing what the debris of a Chinese rocket looked like coming to Earth from space. Earlier in the year 2020 also a similar incident was seen. Even then, the debris of China’s Long March 5B rocket had come down to Earth from space.

What caused the rocket to crash?

According to experts, there were many difficulties in the flight path, as many fluctuations were observed in the atmosphere due to changes in the activities of the Sun. According to experts, the biggest problem with Chinese rockets is their launch process and their design. However, China has denied allegations of irresponsible behavior in its space program. On behalf of China’s Foreign Ministry, it was said that the possibility of any damage due to the rocket is very less.

The debris of a Chinese rocket had earlier fallen in Ivory Coast. There was damage to buildings, although there were no casualties. Last year, another Chinese rocket crashed in the Indian Ocean. Last week, China successfully launched six new satellites into space through its new solid propellant rocket. According to official media, the new rocket ZK1A made its maiden flight from the Jiuquan Satellite Launch Center in northwestern China, which is said to be the country’s largest and most powerful solid-propellant rocket.

Satellites launched through this include a new space technology test satellite and a test satellite related to the investigation of atmospheric density. The state-run China Daily reported that the 30-metre-long and 2.65-metre-wide rocket put six satellites into a predetermined orbit. The regime of Chinese President Xi Jinping has promoted the space program as a major “space dream”, competing with the US and Russia. China had earlier landed a rover on Mars and sent a spacecraft to probe the Moon. China plans to build a base on the Moon and send humans there by 2030.