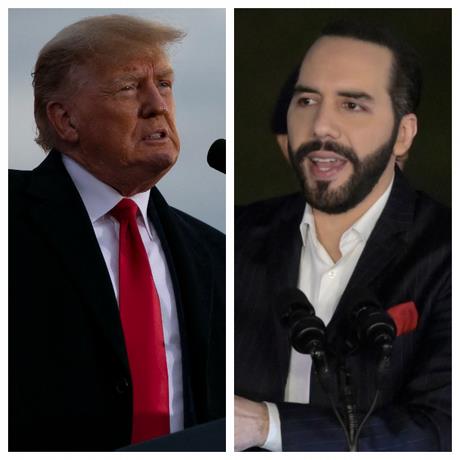 The president of El Salvador, Nayib Bukele, assured this Monday that the administration of Donald Trump in the United States (2017-2021) did support him in his fight against gangs, unlike that of Joe Biden.

The president thus responded to a post on Twitter by the State Department spokesman, Ned Price, who said that Washington "continues to support El Salvador in its efforts to reduce gang proliferation".

Price also urged El Salvador to "uphold civil liberties, including freedom of the press"referring to a recent law that punishes with up to 15 years in prison what the authorities consider to be the dissemination of gang messages in the media.

"Yes, we received support from the US government to fight crime, but it was under the Trump administration. You are now supporting the gangs and your civil liberties"the president wrote.

Two weeks ago Bukele declared the "war" to the gangs that operate in their territory, mainly the Mara Salvatrucha (MS-13) and Barrio 18, after an escalation of violence that between March 25 and 27 left 87 people dead.

At his request, Congress, controlled by the ruling party, decreed an exceptional regime, which allows arrests without a court order, and laws were reformed to punish those who belong to gangs with up to 45 years in prison.

As proof of the cessation of aid from the Biden administration, Bukele recalled that in May 2021 the US cooperation agency USAID redirected the assistance it provided to government institutions to civil society entities.

The aid cut occurred after Bukele, with the support of Parliament, dismissed magistrates of the Constitutional Court and the Attorney General, measures that, for Washington, threatened the separation of powers in the country.

Secretary of State Antony Blinken on Sunday expressed his "concern" by the wave of violence caused by the gangs, as well as by the reforms promoted by Bukele that "criminalize" the work of the press.

Blinken stated that Washington will continue "supporting" to El Salvador in "reduce gang proliferation" and recalled that since 2008 his country has invested 411 million dollars to "to get better" citizen security in the Central American nation.

As of Sunday, 9,634 suspected gang members had been arrested in the past 16 days, according to police.

The Mara Salvatrucha and Barrio 18 gangs, among others, have some 70,000 members in the country, of which more than 25,000 are currently in jail.

McGriff unanimously to the Hall via contemporary committee